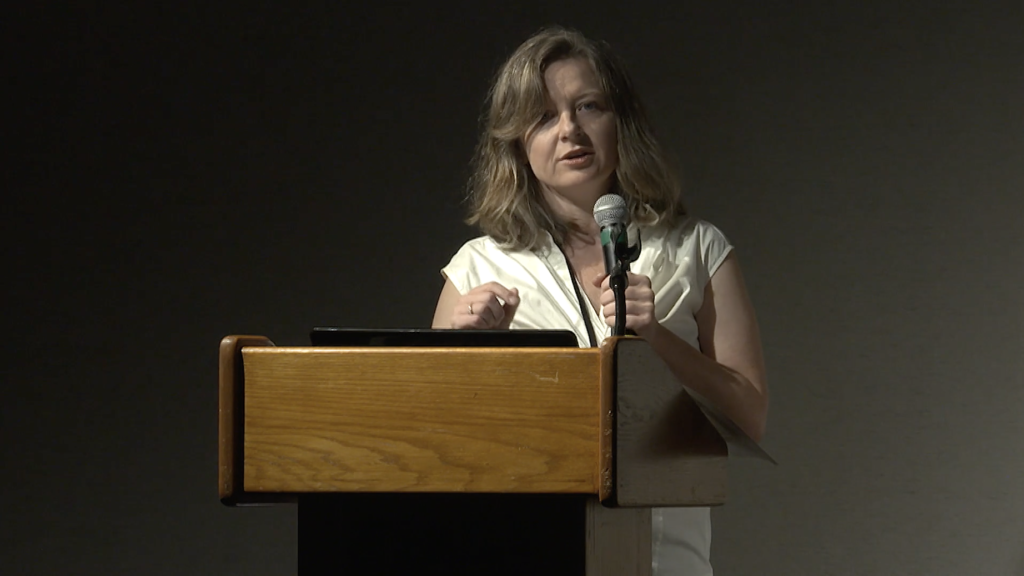 We chose Evidence as the EPIC2018 theme in part to explore this question of why some things constitute evidence and not others. There are lots of factors we could point to, but since I’m standing next to a data scientist the first one I’ll talk about is digitization.

Digitization changes how people live, and it creates forms of evidence about people’s lives that we need to reckon with methodologically. Many of us are in the thick of organizations that handle some complicated datasets, traces of people and their environments, and so on. We’ve got to figure out how to engage with them, and I think that means we need new approaches if we are going to meaningfully intervene.

The toolbox of user experience is only going to get us so far. So we’re going to need some friends, particularly those data scientists who are, like us, committed to the idea that datasets ought to be moored in some kind of social reality, and that they can’t just be built based on what’s expedient at the time. While the tech industry has obviously got to reckon with this, these issues affect every kind of organization imaginable, because data systems are everywhere. So this year was an experiment—an experiment taken in the hope that learning how to work together, we can help both our disciplines make headway in building more socially responsible data systems.

Now I want to be clear that our theme is not just a response to a technical development. There are lots of reasons to think deeply about how evidence is changing.

When I originally was thinking about what to say, I thought an obvious place to start was the post-truth moment in politics, which, in the last few days has laid bare in the most appalling way possible the idea that credible evidence is no match for men whose power is threatened. But we can also see change afoot in more everyday contexts, a slow and steady change in what constitutes evidence in the slow and steady rise of audit cultures, where organizations’ obsession with metrics and targets became self-fulfilling prophecies, regardless of the real-world consequences. So now our teachers are asked to teach to the test, and our businesses design key performance indicators before they have any sense of what relationships could unfold, leaving them somehow surprised that the social impact they’ve had wasn’t what they expected or wanted.

We could even go on to point out how the rise of audit cultures have left us with a proliferation of what David Graeber calls “bullshit jobs”; that is, the emptying of meaning from professional work. He argues that increasingly, when people with middle and upper class jobs go home, maybe have a drink with their partner, they’ll readily admit that what they do all day no real social purpose at all—that it produces no human pleasure, comfort, or relief (his typology of goons, box-tickers, duct-tapers, etc).

So not only do we have measurements that act as self-fulfilling prophecies, but prophecies that are filled to no real end, or purpose, other than to maintain hierarchies within a firm (One of his arguments is that, how do you know you are an important manager? You have lots of managers below you.)

Now I’m probably not going to go out on a limb here to suggest that even if your job is not all bullshit all the time, at minimum you likely recognize what Graeber is talking about. We’re not immune. Ethnography does not give you a get-out-of-bullshit-free card. But like other methods, like good data science, what it does, on good days, is it gives us a way to try to find for ourselves some meaningfulness in a sea of bullshit, while trying not to too swept away ourselves.

So that’s the thing. Bullshit, you might recall, has a precise meaning in philosophy. Bullshit is different from lying—lying is negating the truth, which requires a commitment to it at some level, while bullshitting is a stance entirely indifferent to truth one way or the other.

I believe that we are here today in part because most of us believe that business decisions should not be bullshit: they should be grounded in an awareness of the consequences for human life. Now, we can and will have rip-roaring debates over what kinds of evidence matters, but we gather in the faith that it matters at all. We share our stories—our trials and tribulations—because whether or not businesses find it expedient to discuss, there are human consequences to the choices made about what data matters, whether qualitative or quantitative. There are consequences to the bullshit.

And this is where I stopped, because if you’ve been reading your emails from EPIC, you know that the problem of indifference has taken on an entirely new salience, as workers at this hotel are considering a strike because evidence about their needs has not yet proved to be enough. Hotel workers are already striking at other Marriott properties here over their inability to afford basic costs of living, and to get some minimum protections against sexual assault, which hotel workers experience at astronomical rates. Also at issue is their desire to participate in the decisions about automation that affect them, which is something that in another context would have been our bread and butter.

So while we weren’t able to move away from the Marriott for all sorts of contractual reasons, it would be a supreme act of bullshit to proceed with our conference pretending that the only labor that matters is our own, as if their labor doesn’t sustain ours. And so I encourage you to discuss with one another what action you feel is right to take given the situation we find ourselves in. Not broader reflection or contemplation like I’m doing here, but real action—we can debate what that action should be but we can’t afford to be indifferent to claim that their wellbeing matters as much as our own.

This turn of events has reminded me that the problem with evidence we face is not so much an audit culture problem as it is a Hannah Arendt problem. That is, we can make better or worse choices about what to measure, and we can make better or worse choices about whether we keep measures in their place as one of many data points, or whether measurements should wield power over people, but when power coheres around indifference itself—if what we have are entire modes of social organization where evidence no longer matters one way or another--that’s when we should start worry. Because in that system, everyone in this room loses.

As Hannah Arendt pointed out long ago, bad things don’t happen because moustache-twirling evil-doers do bad things deliberately, they happen because otherwise good people focus on their work as it has been defined for them. They happen when we get exceedingly good at bullshit jobs.

So for me, then, as I think about evidence while standing in THIS hotel, I think about the person who is upstairs right now, alone and vulnerable in my room as she makes my bed, a person whose request for dignity is in part about data—her union is asking for a panic button that would enable her to call for help if roving frat boys should come her way, but instead so far she has likely only gotten a scheduling algorithm that optimizes employer’s needs, not necessarily hers or her children’s. So when we think about evidence, and we think about her, the place I start is not necessarily truth and untruth, but care and indifference. Whose truths do we concern ourselves with, and whose do we not. Who is made to tell their truth over and over again at great personal cost and whose euphemisms go unchallenged.

Over the next few days we will contemplate many forms of evidence well beyond the kinds I’ve mentioned here, but I hope that when we’re done, we leave with a sharpened sense of what evidence matters at all, and a sense for who our allies are in making sure that the evidence that matters also makes a difference.

Dawn Nafus is a Senior Research Scientist at Intel Corporation, where she conducts anthropological research for new product innovation. Her ethnographic research has been primarily on experiences of time, data literacy, self-tracking and wearables. Most recently, she has been working on instrumentation and data interpretation for community-based environmental health projects. Her work takes place in the US and Europe. She is the editor of Quantified: Biosensing Technologies in Everyday Life and co-author of Self-Tracking. She holds a PhD from University of Cambridge.

The phenomenal content from EPIC2018 is ready for you to access on demand—including papers, case studies, keynotes, panels, and PechaKucha.

All articles are FREE to read, download, and share with your colleagues, teams, client, and in-laws. Video is available to EPIC Members. Membership also includes access to excellent learning opportunities and supports the important work of our global community—details here.

Don't know where to start? How about the Opening Remarks by Dawn Nafus.