EPIC2023 chairs Marta Cuciurean-Zapan and Evan Hanover announce our next conference location and theme! Watch, read or listen—then get ready for our Call for Participation coming in January 2023... 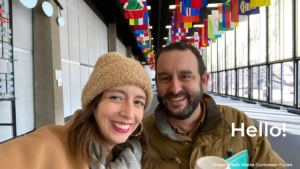 Hello! We are Marta Cuciurean-Zapan, Director of Research and Insights at IDEO, and Evan Hanover, Director at Conifer Research. We are incredibly excited to invite everyone in the room today and online, EPIC members past, present, and future to… 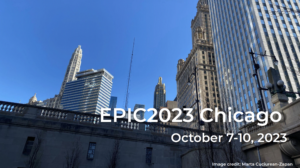 …Chicago, Illinois, for EPIC2023 next October!

Chicago has a rich history shaping the theoretical and methodological foundations of American social science. Some of you may have made your way there to study at one of our colleges and universities. Or had foundational work experiences at firms that put social theory and an ethnographic approach at the forefront of their practice and positioning—such as eLab or Doblin, or the place where the two of us first met and collaborated, Conifer Research.

Then there is the location of the actual conference, which will be the Institute of Design at Illinois Tech. 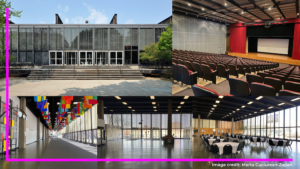 Founded as the New Bauhaus, ID has evolved in a way that has converged with the purpose and passions of EPIC. Starting in the 1960s, when systems thinking, social sciences, and design theory were brought into the curriculum and then moving into the 21st century as user-centered design became a core philosophy and ethnographic methods began being taught, the Institute of Design has been a site for students to engage many of the types of challenges and tensions that we all grapple with in our work, albeit through a more explicitly design lens. 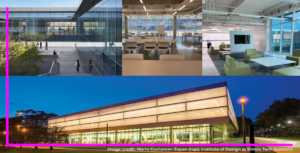 The selection of the Institute of Design at Illinois Tech as the site for EPIC 2023 is about geography as much as it is about professional kinship.  With all apologies to Chicago’s familiar skyline, its river that famously was engineered to run backwards, and our iconic elevated trains, the lifeblood of the city flows from its neighborhoods. Throughout the city’s history, the neighborhoods nurtured arts such as Chicago blues, slam poetry, improv, storefront theater, and literature. And there’s the food. Don’t worry, we’ve got the food covered. 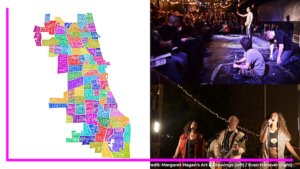 The venues for conference events showcase the diversity of spaces found between the Loop and the neighborhoods. In the heart of downtown, across from Millennium Park, we gather at the Chicago Cultural Center. Built as Chicago’s first central public library, it houses the largest Tiffany glass dome in the world. 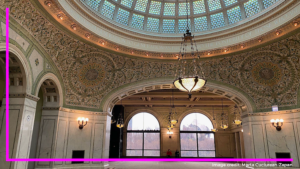 By contrast, we will also visit the Zhao B Art Center, one of several large galleries in the Bridgeport neighborhood, near the ID campus; it is a prime example of how art in Chicago thrives in spaces outside of the center that is the Loop. 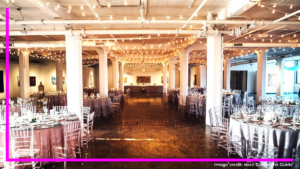 Like any city though, Chicago is complicated, difficult even. So many of the cultural contributions were influenced by and born of the adversity and tensions so fundamental to Chicago. For all of the vibrancy and creativity in Chicago, there have been the wretched working conditions that led to the Haymarket Riots and the meat-packing industry exposé The Jungle, the notorious racism and segregation which continues to be a source of poverty and inequity, and the endemic and audacious political corruption that is often associated with our Windy City epithet. 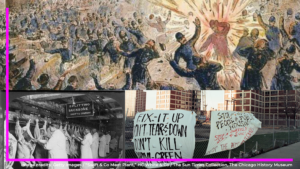 All this brings us to our theme. 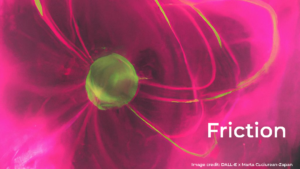 We were inspired by friction’s multiple meanings—it sounds like it can slow things down, but it’s also what makes movement possible. Scientifically, it is the resistance one object encounters when meeting another. As a metaphor, that interaction and that movement creates possibilities for our community. Slowing down, making space for differing interests, and leaning into productive tensions and behavior change benefits our organizations, and how we do research and design. 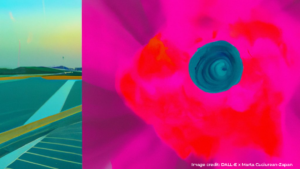 This theme was inspired by Anna Tsing’s approach to globalization, in which friction is an antidote to how globalization is understood and studied, with political, economic, and other universals like capitalism either being understood as fully formed or enacted in cultural specifics. Friction, instead, stands in for “for the diverse and conflicting social interactions that make up our contemporary world.” Friction produces “movement, action, effect.” Friction allows us to see the knowledge and action contained in global “universals” and ethnographic “specifics” on equal theoretical ground.  Universals and local context don’t necessarily signify a clash of cultures, rather, friction emerges in the encounter to alternately encourage or challenge global power dynamics.

We experience friction everyday as researchers, designers, teachers, students, UXers and more...as people. To do good work and to function in our organizations, and to advance specific insights and innovations to the larger context of organizational strategy. This also happens in the specifics, in how ethnographic and other research knowledge surfaces the tensions and the tradeoffs of specific decisions about which products, services, and features to develop and why. For those of us working in systems and strategy, it emerges in the choices that are made in what to invest in, whether it is a research initiative, a portfolio choice, or standing up a new team. 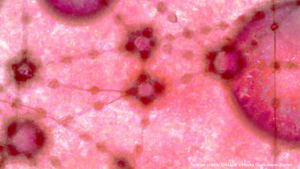 There’s perhaps something in the back of your mind coming up right now that perceives friction as bad. After all, from the perspective of people as users, anything that impedes “the user” from completing an act of consumption - most likely buying something - is a barrier to be removed in favor of seamless user experience. In the interpersonal flux of the organization, friction can be taken as a source of discomfort to be minimized and accommodated. But that’s not how progress and change is made - a world that is equitable and sustainable and takes differing interests into account (including, perhaps, non-humans like the planet), requires slowing down to make time for reflection, decision making, and de-biasing. 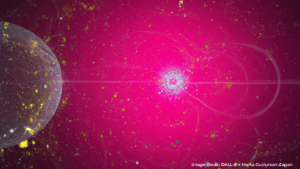 In ethnographic research and the various qualitative, quantitative, design, and data-informed methods we use alongside it, friction allows us to understand the particulars of the universal and the specific. Many of our organizations have climate and equity commitments. This requires understanding our place in responsible innovation, and how what we choose to recommend, develop and why could have a role in those overarching imperatives. In particular fields like health and finance, system and behavior change require understanding the rich ethnographic present of people, what they imagine for themselves and the future, and how to design for and ideally with them to make this possible at the systems level. 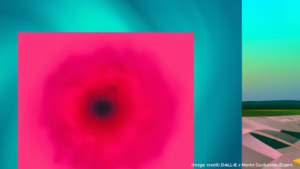 When we are iterating and innovating new products and services, friction is a barrier to be overcome, but this can actually cause issues. Without friction, people might too easily spend and transfer money, or give and share access to personal and browsing data. Friction can introduce thoughtful inflection points to user experiences driven by people’s lived experiences, as we’ve seen through GDPR compliance and the right to be forgotten in some parts of the world. 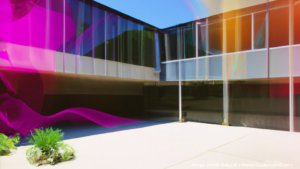 And, in thinking about organizational change and transformation, friction introduces the space and comfort with discomfort essential to our most important equity goals. It means pausing before we assume or decide, and disarming how racial and gender privilege and power function in our organizations. The friction of different interests is inevitable. We believe the path to get to truly novel and better places necessitates the friction of different takes, perspectives, priorities, and intersectional experiences. 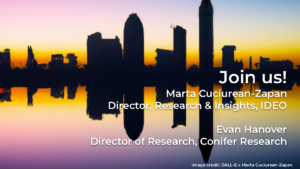 Join us in Chicago next year! We’ll gather to share and learn the benefits of when and how to slow down, organizationally and in research, and build our collective willingness to engage with friction moments. Let’s revel in the opportunity to co-mingle in the encounter of multiple worlds and perspectives! 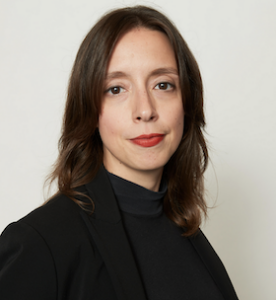 Marta Cuciurean-Zapan is a design researcher and Director based in IDEO's Chicago studio. She’s a six-time EPIC presenter and facilitator since 2014. As a co-lead of Research and Insights at IDEO in North America, she is focused on building innovative research approaches, futures perspectives, and the intersection of content, belonging, and culture in teamwork. Marta brings this lens across industries, including mobility and financial services. Her previous work includes user experience at Uptake, pioneering an industrial analytics platform at the intersection of Big Data and the qualitative, behavioral, and emotional context of work and product use. At Conifer Research, she began her career leading teams through ethnographic, design research, and innovation challenges. Marta also teaches human centered research and design at DePaul University. She has a Master's in Cultural Anthropology from Temple University and a Bachelor’s in Anthropology and Art Theory and Practice from Northwestern University. She enjoys hanging out, arts and crafts with her daughter, and running slowly through Chicago's city streets and parks. 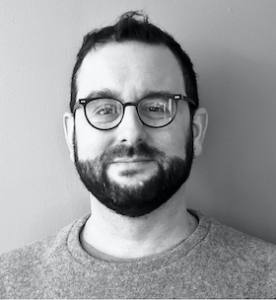 Evan Hanover is an anthropologist and Director at Conifer Research in Chicago. At Conifer, he is passionate about his teams bringing keen anthropological and semiotic lenses to their work. He has done this for clients on topics ranging from healthcare to boating to innovation ethics. He has been an EPIC regular since 2014—presenting, serving on the Pecha Kucha and Tutorials Committees, and occasionally just attending as a civilian. Evan has degrees in Anthropology from the University of Chicago and Cornell University and continues to be surprised and delighted daily that he is using them. In his less ethnographic moments, he tries to make his family laugh, does production photography for several Chicago storefront theaters, and practices the art of soup making.