I will admit that as soon as I heard there was a newly published novel about a corporate anthropologist, I took the bait and grabbed a copy (metaphorically, of course, given that I in fact downloaded an e-book). How would my world and my work be represented in fiction? What truths or myths might be relayed to the reading public? And fundamentally, would I find it an enjoyable read? 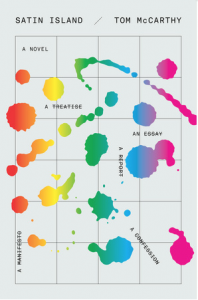 As I started this beautifully written book by Tom McCarthy, I realized I had to shift my expectations, and in so doing found many truths, not so much about the work we do but about the world and our existence as 21st century humans, truths that are appropriately more literary than anthropological. While the book on its surface appears to be an extended representation of corporate anthropology, presenting a unique public view on our field, at its core the book is really not about corporate anthropology or even really a corporate anthropologist. McCarthy does however have enough of an understanding of anthropology to use the profession of his main character, written in the first person, to enable him to use his authorial voice to transmit an ethnographic reflexivity and sensibility.

Satin Island is told from the viewpoint of U., an anthropologist working in a London consultancy referred to simply as the Company. The Company has won a contract for a portion of a large international project, though exactly what the project is, or the Company’s portion, or U.’s role are never specified. U. spends his days (as so many of us do) in his basement office, covering his walls with current topics of interest in which he attempts to find universal truths. In fact, his “real” project with the Company is to write the Great Report, an unspecified ethnography of now, which he can somehow never find the right angle on.

If ethnography, at its most basic definition, is the written description of a people, then it feels appropriate that the form for describing “now” is so elusive. As I, like U., sit in my office watching random videos in the name of gleaning cultural insight, I can justify my work as somehow productive while never actually putting my finger on exactly what that is. To McCarthy’s credit, this state is not unique to anthropologists in industry, but relatable to all office drones. Like U., we keep ourselves going because of the meaning we put to the world, and it does help to imagine that “The world functioned, each day, because I’d put meaning back into it the day before.”

U. does address a bit of the actual profession: “What does an anthropologist working for a business actually do? We purvey cultural insight. What does that mean? It means that we unpick the fibre of culture (ours), its weft and warp—the situations it throws up, the beliefs that underpin and nourish it—and let a client in on how they can best get traction on this fibre so that they can introduce into the weave their own fine, silken thread, strategically embroider or detail it with a mini-narrative (a convoluted way of saying: sell their product).” While many of us feel what we do has more meaning than an end corporate goal, we must admit that day to day our meanings are used for rather tactical ends.

Despite U.’s inability to frame the Great Report, Satin Island itself is a lovely and concise treatise on the malaise and angst of middle aged professionals encountering work, love, death, and daily life in a world that requires constant evaluation and reevaluation for each individual’s own personal sensemaking. The stories we tell, the structures we create, are overlays of our own existence, and we all, like U., search for “a universal structure lurking beneath nature’s surface, only now beginning to seep through.” 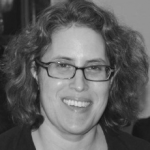 Alexandra Mack is a Research Fellow in Pitney Bowes’s Strategic Technology and Innovation Center. Her work is focused on developing ideas for new products, services, and technologies based on a deep understanding of work practice. Since joining Pitney Bowes in 2003, she has worked on different projects across business units, bringing user centered approaches to product development and innovation. She has worked on projects in health care, retail, software, and financial services industries as well as non-profits. Prior to coming to Pitney Bowes, Alex worked for a small design consulting firm. She also spent several years consulting in marketing and strategic research, combining qualitative and quantitative techniques. Alex finished her PhD at Arizona State University in Anthropology and has been actively engaged with the EPIC community since 2005.

2 comments for “Satin Island: An Appreciation”