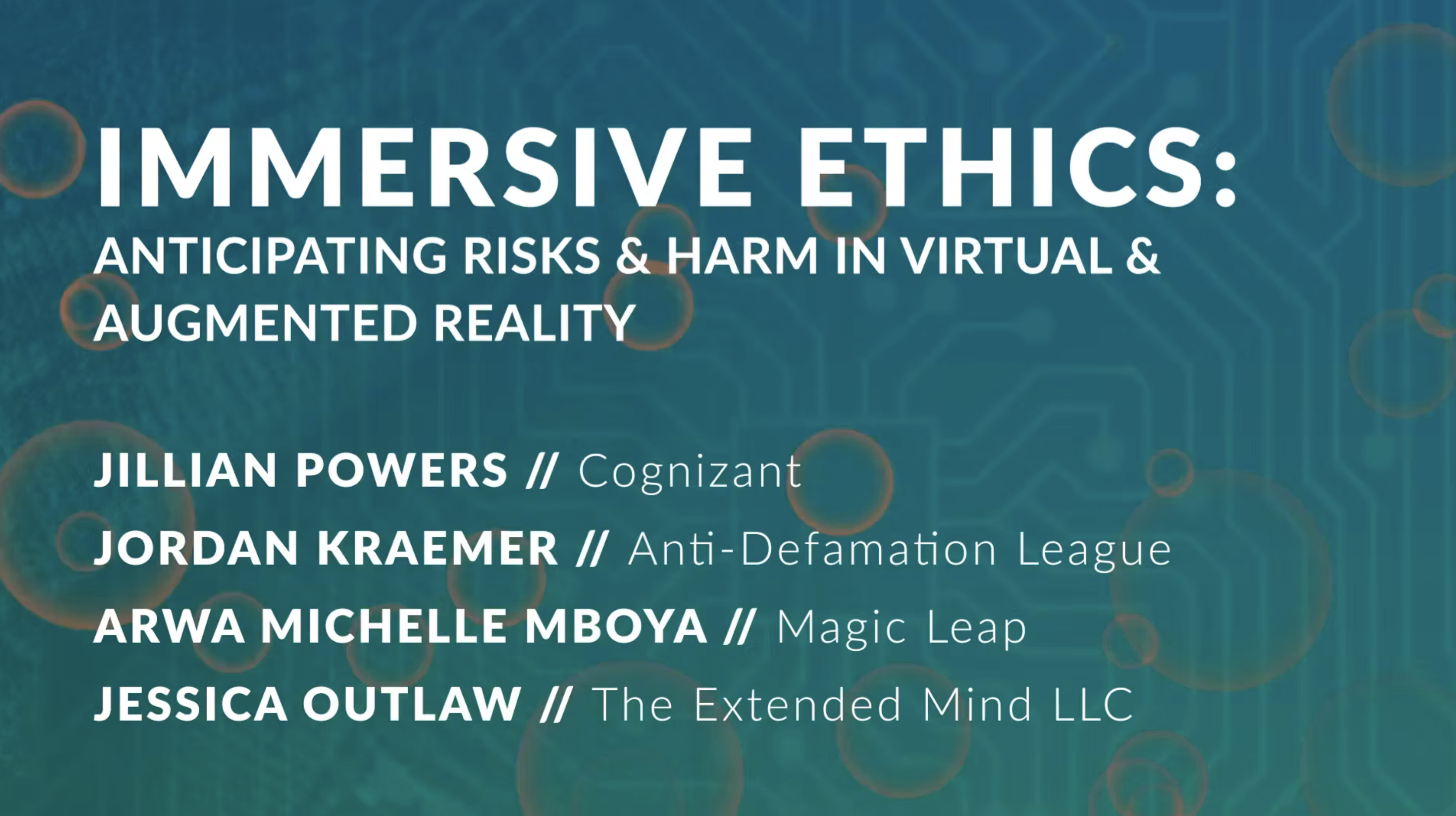 As new technologies, from AI to immersive experiences, are developed at scale, they raise ethical concerns for research and design. Data-driven systems have repeatedly been shown to entrench social biases along lines of race, gender, and class, from racist algorithms in the criminal justice system to misgendering trans and nonbinary people. Immersive technologies, such as virtual reality (VR) and augmented reality (AR), however, raise separate and thorny questions for ethical design. Immersive technologies create novel experiences of embodiment and reality, not to mention new sources of personal data. These facets create distinctive challenges for ethics, equity, and inclusion, intensifying the potential harms of misinformation, harassment, privacy violations, surveillance, or unequal access. How can ethnographic research anticipate emergent ethical questions specific to VR and AR applications? This panel brings together academic and industry voices to discuss frameworks for ethical tech, inclusion and accessibility in VR/AR, new research strategies for designing ethical VR/AR, and how to advocate for people-centered VR/AR applications across product design and research teams.

Jillian Powers, PhD is an applied sociologist, educator, and general rabble rouser who cut her teeth in the undercommons of elite universities. After receiving her BA from Dartmouth College, she earned her PhD from Duke University in Sociology. She has held postdoctoral positions in American Studies and Sociology at Washington University in Saint Louis and Brandeis University, and has taught civics at Democracy Prep High School in Harlem NY. In 2016, after another disappointing year on the academic job market, she went rogue. She now works in the private sector as the Lead for Responsible AI for Cognizant, a multinational digital and professional services company, and joyfully lives in Crown Heights, Brooklyn where she builds her community. She has lots of strong opinions, and has been regularly called a "difficult" woman.

Jordan Kraemer, PhD, is a media anthropologist and ethnographer of emerging technologies. She is currently Director of Policy and Research, Center for Technology & Society at the Anti-Defamation League. As an anthropologist, she researches digital placemaking and urban inequality, and recently completed a study on digital platforms and neighborhood organizing during COVID-19 in NYC, supported by the Social Science Research Council Just Tech program. Previously, she taught at NYU Tandon and Wesleyan University, where she was a Mellon Postdoctoral Fellow. She is finalizing a book on social and mobile media among an emerging middle class in late 2000s Berlin, forthcoming from Cornell University Press and holds a PhD in cultural anthropology from the University of California, Irvine. She lives in Brooklyn.

Arwa Michelle Mboya is a designer and researcher in the XR industry, currently working for Magic Leap. She has a Bachelor of Arts from Yale University and a Master's of Science from the MIT Media Lab. While at MIT, Arwa studied the implications of immersive technology on the imagination. She led the first Pan-Africa AR/VR Hackathon in Nairobi and designed a new VR headset (based on Oculus Go) as a result of research on how women in informal settlements interact with VR. Arwa is from Nairobi, Kenya.

Jessica Outlaw is a behavioral scientist and founder of The Extended Mind LLC, where she has designed, executed, and published research on how to make Virtual Reality, Augmented Reality, and Artificial Intelligence technology more human-centered. She is a 2017 winner of Oculus Launchpad for the VR app Teachers Lens co-created with Clorama Dorvilias. Jessica is fascinated by the way emerging technologies can impact the experience of reality and embodiment. Having worked with many different types of product teams, she's seen up close the types of tradeoffs that technologists make when it comes to design and development.