by DAWN NAFUS, Intel Corporation
*Join Dawn Nafus on September 1 when she hosts Ethnography & Quantified Self at EPIC2016.

A few years ago, a colleague had asked me about the adoptability of biosensors—a rapidly evolving category of sensors that detect an ever-expanding array of stuff about the body or the environment. Water quality, air quality, hormones, temperature, microbiomes are increasingly possible to measure with consumer-grade devices and services. He had seen how medical sensing technologies had become smaller and cheaper, increasingly reworked into consumer devices for use outside of clinical settings. How much appetite would there be for an expanded reperotoire of data in ordinary people’s hands? Is that appetite really a consumer one, or one that was more likely to come into play in institutional contexts like biomedical research or technology-delivered healthcare?

These were complicated social and cultural questions, made even more complicated by the fact that, at the time, there were really only limited proxies for sensing capabilities that for the most part had not yet reached the market. I could not just go out and study the adoption of biosensors per se. Still, there was plenty of work to be done. What my colleague was asking about, really, was the social dynamics that biosensors would surely encounter—dynamics that we could get our heads around even if we could only make guesses about the specific contexts in which any one of these things would turn up. And so was born a three-year, four-university research program called Biosensors in Everyday Life. 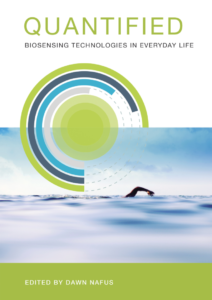 Quantified: Biosensing Technologies in Everyday Life is an edited volume that shares the results of that program. The research program was the beginning of a conversation about how biosensors are emerging into a set of broader cultural logics, such as biomedicalization, issues of what counts as meaningful participation in data and meaning-making, definitions of “the clinical,” and questions of where bodies end and environments begin. This volume invites the public into the conversations that we had with researchers, and that researchers had among themselves, on the topic. It also draws in other contributors who the program encountered along the way, whether in academia, industry, or the non-profit world. Many of these authors address the material, legal and business realities of what it might take to steer biosensing practices into socially benefical ones.

As anthropologists like Melissa Cefkin, Rita Denny, and Patti Sunderland know, editing a largely academic volume from the position of working in the private sector has its challenges. One of the goals for this volume was to create a space that makes visible the intersections that are possible on this topic when there is a shared goal of shaping potential outcomes, even if there is not total agreement on what counts as problematic. These intersections traverse radically different epistemological commitments and institutional priorities. This is deliberately not a book where everyone is singing from the same hymn sheet. Instead, it reflects the kinds of conversations that anthropologists in industry often find themselves in—conversations that sometimes require deepening one’s knowledge of what it takes to build something, and sometimes require engaging with theoretical concerns, like notions of public and private as an unstable form of cultural recursion. Indeed, both of these things are addressed fairly extensively in the book in order to raise questions about how one might build technologies that respect notions of privacy without presuming an atomized, a-social “end user.”

In this way, biosensing is not a phenomenon explainable or controllable from only one area of expertise. Satisfying ourselves from the relatively safe confines of, say, an anthropology conference, that biosensing raises problems of neoliberal social control and biomedicalization is one thing. It is quite another to reflect on those social dynamics in dialogue with the engineers, entrepreneurs, and people from civil society organizations who might also respond with the question “so what can we do about it?” The contributors quite generously opened themselves up to such a dialogue, even if “so what can we do about it?” was sometimes more my preoccupation than theirs. My hope is that by sharing these dialogues, more people will also be able to answer the question “so what can we do about it?” from whatever position they are in, using whatever skills they already have.

Dawn Nafus is a Senior Research Scientist at Intel where she has done ethnography on experiences of time, technology adoption and notions of development, and, most recently, quantification. She is the editor of Quantified: Biosensing Technologies in Everyday Life (MIT Press, 2016) and co-leads the Data Sense project, which creates data processing and visualization tools for non-expert use.

Data, Data Everywhere, but Who Gets to Interpret It? Dawn Nafus

What We Talk about When We Talk Data: Valences and the Social Performance of Multiple Metrics in Digital Health, Brittany Fiore-Silfvast & Gina Neff (free article, please sign in)