Welcome to EPISODE FOUR in a series of conversations with some of the makers and speakers of EPIC2021—a global, virtual conference and community promoting ethnography for impact in business, organizations and communities. 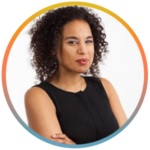 In this episode, Luc Aractingi talks with Lauren Rhodes, Design Research Strategist at Crown Equipment Corporation and Chair of the EPIC2021 Panels Program.

Find out how Lauren is shifting norms about who gets staged as an "expert", and get her pro tips for networking and getting involved.

LUC: Hello and welcome to EPIC interviews, a series where we get to know the makers and the host of the conference EPIC2021. Today we are interviewing Lauren Rhodes. Hello, thanks for being here.

LAUREN: Thank you for having me.

LUC: I was wondering if you could describe your job to a stranger.

LAUREN: If I could describe my job to a stranger. My actual title is Design Research Strategist at Crown Equipment Corporation, which is a manufacturing company based in New Bremen, Ohio. We make forklifts. The equipment that allows all of your packages and items to get into trucks to deliver them to your house, which is very important now during the pandemic. So in terms of what I do in my job, I'm part of the design research team. What we do is we help Crown learn more about our customers, learn more about the products that Crown actually uses, to create our own products as well, and then also assist the design department too, and its creations—or at least kind of giving them information to help them create the products.

LUC: This year there is going to be Anticipation. I was wondering if you could tell us what excites you the most about it?

LAUREN: Well, I think it comes at the appropriate time. I know when they came up with the theme itself, the pandemic was kind of just starting and becoming more global. And because of the challenges that we have right now as ethnographers and anthropologists and researchers in terms of doing our work, we're always used to doing face to face being in person, that's how we do our best work. Now we've had to reconfigure the type of tools that we use for ethnographic work that we're using in practice, at our companies or institutions or our consultancies. In many ways, the theme itself speaks to that because it's about: we've started developing these new tools, how do we take them forward? Or how do we think about how we can do our work in the future? And then I think for me with the panels specifically, it's really about the themes of each panel and how each individual panellists thinks about the future or conceptualizes the future. Or even defines it, like, when we talk about the future, what are we talking about?

LUC: In that regard, what do you hope to gain from this year's conference?

LAUREN: That's a really good question. I started going to EPIC two years ago. My first one that I went to was in person; it was in Providence, Rhode Island, in my home territory 'cause I'm from New England originally. That was great to go back to New England. So, when I first went, it was really just about absorbing all the information that I could ;think about how it would apply to my work back at Crown; and also meet other people who were doing something similar to what I do, my day-to-day. And then the last conference, which was virtual from Melbourne, became really about networking and still about how people do their work, and how people are thinking about doing their work in the age of the pandemic. That's what I really want to get out of the conference this year.

One of the questions that haven't been asked is in terms of my construction of the panels and the panelists themselves. And what I hope other people get from the panels is that one of the things I really strove for is representation. By that, I mean not just representation in terms of race and ethnicity, but really in terms of geography, because I felt that in the past couple of EPICs that I've gone to, that it wasn't as much of a wide spread as it could be.

A lot of the experts and the researchers who were talking were all coming from the same geographic quadrants. So, it would be Western Europe; maybe there'd be two or three people from the South and Central America. And then it was like pretty much all the United States, and then of course, because last year was Melbourne, it was a lot of individuals from Australia, which makes sense because it's coming from Melbourne, of course. An then there were a few people who were from the Asian continent—however we’re going to define Asia and because it's really big and really diverse!

It was also really important to me because I used to live in Latvia that if we're going to talk about having panellists from Europe, we have to talk about all of Europe and what Europe means. The Eastern part of Europe, I felt, also hadn't been represented very much. The experiences, particularly in what we call the quote-unquote “post-Soviet block,” which—you know it's been 20 years since then so we can kind of get rid of that—but that way of thinking, here in the West. Their experiences and their approaches to things like ethnography and creativity, I feel, have some very slight differences to the way they work out in Western Europe, just because of the experiences and the generational experiences in that part of Europe. So I made sure that I found two artists from Latvia to be on the artist and creative panel because I felt that their voices were needed as well.

The other thing you'll see, too, is that our AR/VR panel, the one that's looking at ethics in virtual reality and extended reality, it's all female-identifying. That was really important because I know in most conferences, it usually ends up being white European males. To be frank, to be honest, those who are considered the arbiters of knowledge in technology. The two people who happen to propose that panel, Jordan Kramer and Jessica Outlaw, in terms of when I thought about like, who else could be on the panel with them and who I was recommending to them, that was like at the forefront of my mind too. It’s like, can we change? Can we make an impact by changing who is talking about technology or who is talking about business? Who we're seeing as the experts because panelists are always—and moderators—are seen as the experts in their field. I wanted to really say, like, look—we need to kind of rethink who we put forward as the experts.

LUC: I was wondering if you had any advice for any newcomers to EPIC this year?

LAUREN: I would say that because it's virtual, you don't get to have a lot of the in-person contact. I know they're working out different virtual ways of addressing that issue. I'm really excited to see how all of that works in reality. But really take advantage of all the different people that you're going to meet. If somebody asks a really good question or makes a really good comment during a panel or a paper session, don't be afraid to reach out to them and say, Hey, I really liked what you were saying, I would love to talk to you about it more. If you're a recent graduate like yourself, and there is somebody who's doing work that you find really interesting and really exciting, don't be afraid to reach out to them.

I think that the strength of EPIC is really in the networking piece. It really is. I think that is one of the things that EPIC does best. That networking piece—the learning piece is also really important too—but just the type of people that you're going to meet at EPIC you’re not going to be able to meet anywhere else. For me, when I think about it, I only did my first EPIC back in 2019. And then because I kept on networking and talking to Jennifer Collier Jennings and to other people in EPIC and really kind of voicing, "Hey, I want to become involved," I was co-hosting a salon last year. This year I'm panel chair and becoming a lot more involved in EPIC than I ever thought I was going to be. The same thing with you—you really like EPIC. You said, Hey, I want to help out in some way.

EPIC is great for that as an organization because if you say I'm interested in becoming involved or I wish to be more involved, be careful what you wish for because the minute you do, you will become more involved!

LUC: Well, it has been a pleasure speaking with you. Thank you so much for having been here today.

LAUREN: Thank you so much for taking the chance to talk to me and reach out to me as well.

LUC: I look forward to seeing you at the conference, then.

LAUREN: Yes, I look forward to seeing you at the conference as well. For the people who are going to be listening to this, I am really interested in and learning, hearing everybody's reactions to the panels because they're now sources of pride and joy for me. I think they're going to be very impactful.

Luc Aractingi holds an MA in social anthropology and art history from University of St Andrew's, and a BA in economics from Grand Lycée Franco-Libanais Beyrouth. He's worked on a range of insights projects and speaks Arabic, English, French and Italian.