In the last ten years, an eclectic mix of electronic nicotine delivery products (‘e-cigarettes’) and practices have proliferated in the US with little restriction, producing a vast array of vaping mechanisms, flavors, and styles. At the same time, anti-tobacco movements have targeted e-cigarettes as a threat to public health and advocated for restricting e-cigarettes in much the same way as conventional cigarettes. While anti-vaping proponents associated with public health movements have typically regarded e-cigarettes as primarily harmful products that should be suppressed, vaping advocates regard e-cigarettes as harm reduction products that should be readily accessible to smokers. Distrust between these two warring “sides” animates the controversy over e-cigarettes. In our role as researchers conducting a qualitative study on e-cigarette use, we encountered suspicion and anger from members of an e-cigarette forum who felt that pro-vaping perspectives were often misrepresented by researchers. As a result, we dropped our initial plan to host a group discussion of questions directly related to our study on the forum. Nevertheless, the incident illuminated how vaping advocates have resisted dominant narratives regarding tobacco and nicotine use, destabilized nicotine product categories and challenged interpretations of nicotine use that dichotomize pleasure and health.

At the outset of a study aimed at understanding e-cigarette use among young people, we wanted to experiment with conducting a group discussion with participants on an online e-cigarette forum, but we also worried about how we would be perceived in our role as researchers linked to a public health organization. The wars over e-cigarettes – their health effects, how safe they are, how they should or should not be regulated – had grown ugly, and we had seen colleagues harassed online or professionally sidelined because they were perceived as either too anti-vaping or too pro-vaping.

Our own position researching vapers’ perspectives within a public health framework trapped us between the “vapers” side (relatively pro-vaping, construes e-cigarettes as primarily reducing harm-reducing) and the “public health” side (relatively anti-vaping, construes e-cigarettes as primarily harmful)1. Acceptance by one side, it seemed, led to rejection by the other side. Ultimately our e-cigarette forum experiment failed, in part because of how users perceived our position in the conflict between vapers and public health. Nevertheless, the experiment also highlighted aspects of “carnival spirit” animating the credibility contest between the two opposing sides, and the challenge that vaping advocates have posed to conventional narratives about tobacco and nicotine products. In particular, our encounter with e-cigarette forum members points to vaping advocates’ “transgressive resistance” to institutional messaging about e-cigarettes, and their refusal to subordinate the pleasures of the “sensual body” to the austerely “ascetic body” (Lachmann, Eshelman, and Davis 1988). In order to approach these points, we will first need to summarize some recent history that shapes the dominant sides in the e-cigarette wars. 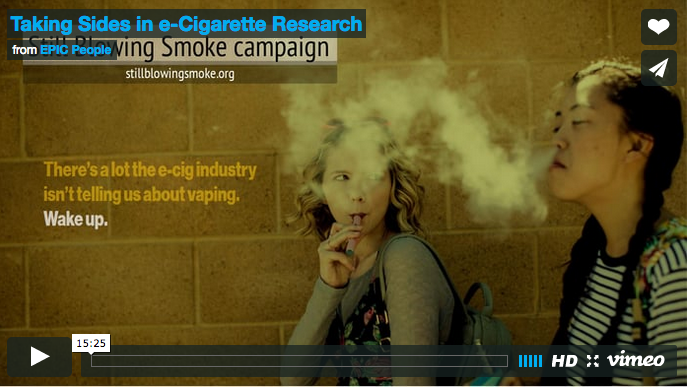