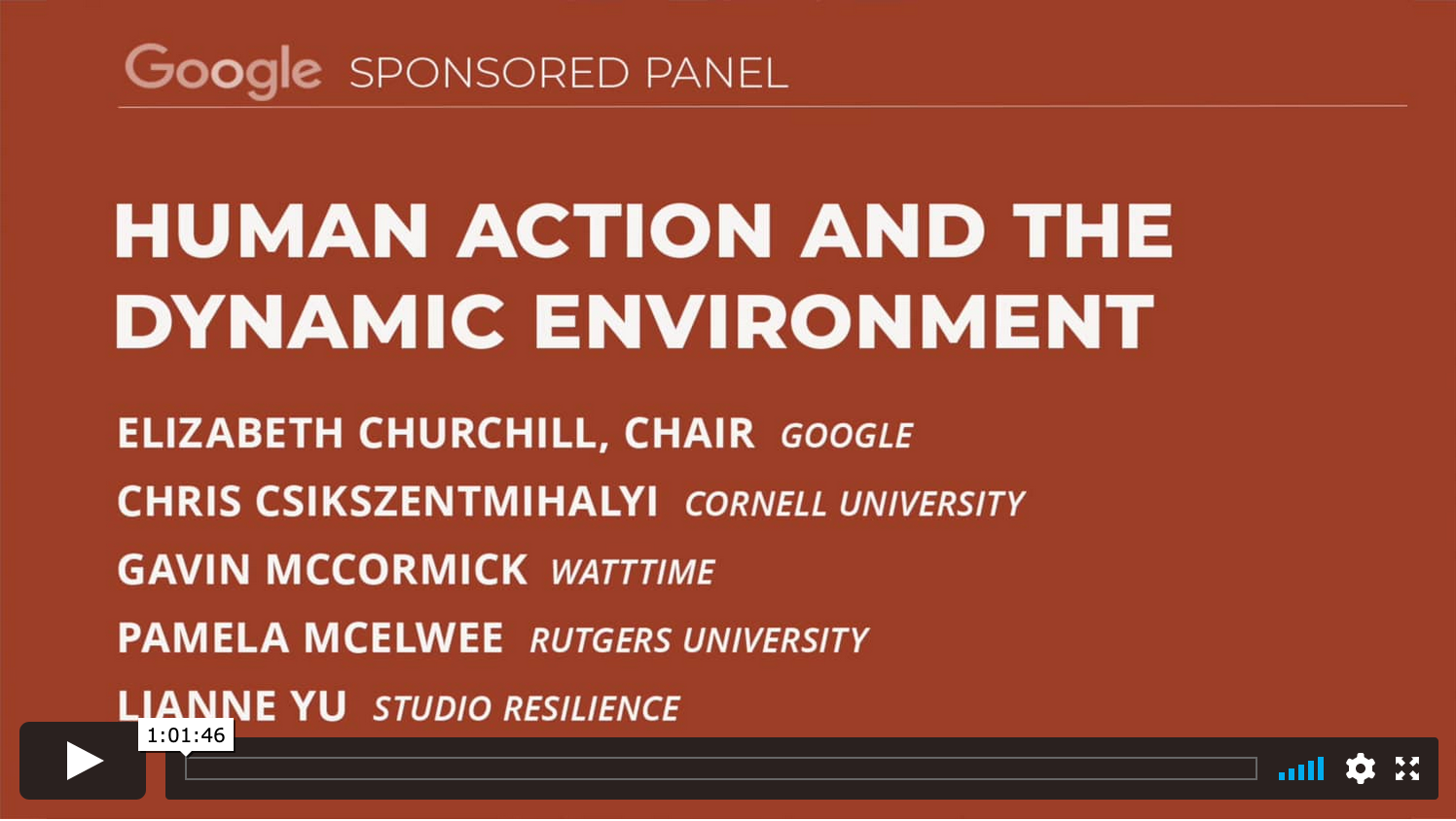 What does human scale mean through the lens of the environment? Alternatively, what does the scale of the Earth’s environment mean to human activity and life? We may start by thinking of the enormity of the problem to just describe these two perspectives. But, by stepping back and reframing our questions in terms of the tools we use—design, ethnography, AI, art—we gain a powerful and novel perspective.

Panelists discuss their work in terms of the world’s biggest threat, climate change. Approaching this topic from each one’s unique worldview and the tools of their practice, they follow out the scales of local to global and how small and seemingly one-off events can grow to a world scale. How do we design, provoke, educate—and ultimately change the world—by employing disparate data types and different scales? How can we reconfigure the notion of a dynamic environment?

Elizabeth Churchill is a Director of User Experience at Google. She has built research groups and led research in a number of well-known companies, including as Director of Human Computer Interaction at eBay Research Labs, Principal Research Scientist and Research Manager at Yahoo!, and Senior Scientist at PARC and Fuji Xerox’s Research lab. Elizabeth has more than 50 patents granted or pending, 5 co-edited and 2 co-authored books (Foundations for Designing User Centered Systems and Designing with Data), and over 150 publications in theoretical and applied psychology, cognitive science, human-computer interaction, mobile and ubiquitous computing, computer mediated communication, and social media. She presented a paper at the first EPIC conference and has made many important contributions since. Elizabeth is also Secretary/Treasurer, Vice President Elect, and Distinguished Scientist and Distinguished Speaker of the ACM. She holds a BSc in experimental psychology, an MSc in knowledge-based systems from the University of Sussex, and a PhD in cognitive science from the University of Cambridge.

Chris Csíkszentmihályi is Associate Professor of Information Science at Cornell University. Previously, he was a European Research Area Chair in Portugal, and founded the free/libre Rootio Project, a sociotechnical platform for community radio. Csíkszentmihályi has been a professor at universities in the USA and Europe, notably founding and directing the MIT Center for Future Civic Media (C4), dedicated to developing technologies that strengthen communities; and the MIT Media Lab’s Computing Culture group, creating unique media technologies for cultural and political applications.

Gavin McCormick is Executive Director of WattTime, the nonprofit that first developed Automated Emissions Reduction (AER) technology. He is also a cofounder of Climate TRACE, a coalition of nine nonprofits and tech companies developing a shared AI platform that aims to detect all major sources of greenhouse gas emissions on Earth. Gavin was pursuing a PhD in behavioral and environmental economics at UC Berkeley when he discovered the algorithms that make AER technology possible, and dropped out to found WattTime.

Pamela McElwee is an Associate Professor of Human Ecology at the School of Environmental and Biological Sciences, Rutgers University, New Brunswick, NJ. She is trained as an interdisciplinary environmental scientist, with a joint PhD in anthropology and forestry, and her work focuses on vulnerability of households and communities to global environmental change, including biodiversity loss, deforestation, and climate change. She has worked for the last 25 years on sustainability issues in Asia in particular.

LiAnne Yu is an anthropologist and award winning writer who has done global research on artificial intelligence, social media, underserved communities, health & wellness, and entrepreneurialism. She lived in Asia for several years and is the author of Consumption in China: How China’s New Consumer Ideology is Shaping the Nation. She splits her time between San Francisco and Kona. Most recently, she co-founded Studio Resilience, a design lab focused on creating digital artifacts for exploring and sharing the impact humans have on our environment. LiAnne holds a PhD in Anthropology from the University of California, San Diego, and a BA in Chinese Studies from UC Berkeley.