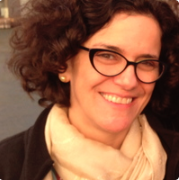 Many of us have a kind of conversion story—that enlightening moment when we discovered anthropology at university or even later in our careers. But Melissa Cefkin knew she wanted to be an anthropologist by the age of fifteen. The daughter of a professor and raised in a college town, she was introduced to the discipline by a coworker studying to be a survey archaeologist. Recounting the experience, she remarked, “My first thought was, oh my God, if I study anthropology then I don’t actually have to choose between different disciplines! It’s a little bit of everything!” She was hooked. She obtained her B.A. in anthropology from the University of California Santa Cruz and went on to earn her Ph.D. at Rice University. Since 2006, she has played a major role in the development of EPIC, serving in multiple positions including President, Secretary, and Co-organizer. Melissa is currently Principal Scientist for Nissan Research Center – Silicon Valley (NRC-SV).

Anthropology complemented Melissa’s upbringing within an internationally oriented, politically engaged family that spent time in both Africa and the Middle East. Her childhood equipped her with “an early sensibility to the anthropological notion of cultural relativity—of recognizing the depth of different ways of thinking and understanding that I think are valuable to pursue.” Admitting that this cultural relativity makes things more complicated, she remains stimulated by its diverse applications.

Melissa was profoundly shaped by her undergraduate and graduate experiences during an era of intense reflexivity within the field. She describes it as “really resonant and ripe and vibrant and combative. It was a controversial time”. Her professors George Marcus, Mike Fischer, and James Clifford were among those who challenged the discipline to rethink the ethnographic enterprise and the nature of anthropological consciousness.

Alongside this critical reflexivity, Melissa was drawn to investigations of performance and sensemaking. A avid folk dancer in her teenage years, she found inspiration in the intersection between self-presentation and identity creation. Her dissertation “Choreographing Culture” explored folklore, dance, politics, and identity-making for Turkish young adults. If this research sounds unrelated to her subsequent positions at Sapient, IBM, and Nissan, Melissa asserts that her academic training has continued to underpin her work outside of the university. She strives to maintain a critical perspective on knowledge construction as she navigates performative dimensions of social, material, and technological worlds.

Melissa’s bridge from academia to industry was forged at her PhD graduation party, where she had an unexpected conversation with someone working on a corporate organizational project. At the time, “it sounded like the most bizarre, funky, exotic thing that I could imagine”—much more unconventional than her time spent in Africa and Turkey. But it wasn’t immediately obvious how her training as an anthropologist could translate into such a corporate setting. She was, after all, aiming for a tenure-track position at a university. It wasn’t until she took a job with the Institution for Research on Learning (IRL) that she realized the exposure and access afforded by work outside of academia. She felt there was much to learn from it and, hopefully, to contribute. She decided to drop her pursuit of an academic position.

Melissa’s work at IRL was deeply ethnographic. She researched anthropology in organizations and explored related phenomena including group empowerment, culture shaping, and learning within institutions. The contract projects drew heavily on discourses of identity-making, communities of practice, and the anthropology of work.

After seven years of stimulating work with IRL, Melissa joined Sapient, a technology and business consulting firm that innovatively integrated design and ethnography. Interested in this synthesis, she took a position as Director of Ethnography—Sapient was the first firm ever use this title in a corporate setting, to her knowledge. Sapient’s dedication to applied ethnographic inquiry was critical to the advance of ethnography in industry, alongside pioneering companies such as Xerox PARC, Microsoft, IBM, and Google (Cefkin 2009:5). The company was a crucial stepping stone for her, as it was for many leading corporate ethnographers, enabling her to exercise her anthropological expertise in increasingly applied realms.

With this foundation, Melissa moved on to IBM in 2004. She had been following IBM’s transition into service research, an area that she was already immersed in. Excited by the opportunity to be a part of an “honest-to-God research division”, she stayed with IBM for over a decade. Her position enabled her to dig deeper into the organizational realities that stimulated much of her work. She thrived on studying the ways in which socio-technical trends impacted work-related, legal, organizational, and economic constructs.

In 2015 Melissa left IBM to become a Principal Scientist for Nissan Research Center – Silicon Valley (NRC-SV). She explains, “First and foremost, I couldn’t resist”. And who could blame her? She now leads foundational research on the technical development of autonomous vehicles. Working alongside roboticists, computer scientists, and electrical and mechanical engineers, she is helping to design the technical systems of a self-driving car that won’t be fully developed for years to come. 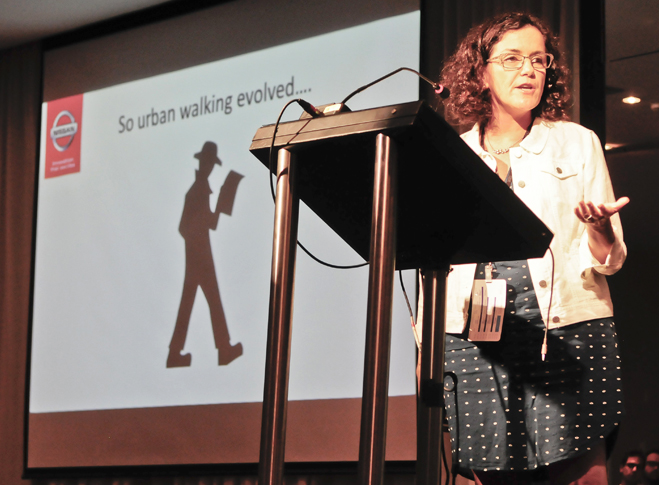 Melissa describes her division at Nissan as “young and scrappy… a little bit like a start-up within a well-established company and industry”. This, too, piques her interest. She sees opportunity in the novelty of it—the possibility of shaping a research division that can eventually examine the impact of the autonomous vehicle on a grand scale. What is the autonomous vehicle as a social object in the world? How might it affect urban infrastructures, personal identities, driving roles, ownership models, socioeconomic systems, and more? As she says, “It’s too rich of a topic to pass up. The increase in the ways computational, data-driven, algorithmic and autonomous systems are shaping and guiding society are vast. It’s important for researchers trained in more humanistic fields to be a part of this. The consequences of this work are potentially huge. I hope to make a difference.”

What motivated Nissan to “buy in” to ethnography? Melissa attributes much of NRC-SV’s ethnographic orientation to the vision of the lab director, Dr. Maarten Sierhuis, and the efforts of Dr. Brigitte Jordan, a senior advisor to the lab. Both have helped shepherd in the value of a humanistic perspective to the organization.

While the NRC-SV provides a catalyst for significant research possibilities, it also represents another distinct environment that anthropologists must adapt to. Melissa is concerned about the gap that still exists between technical and social forms of expertise. She didn’t come to NRC-SV to be a computer scientist, but to work proactively with her colleagues to translate sometimes distinct viewpoints. She sees opportunity in grounding computer code in social terms. Luckily, the team remains a manageable size with a collaborative approach: there is “hope and promise and a lot of goodwill”.

Interestingly, the binary worlds of social and technical come together with Melissa and her teammate, Blair Williams. Blair, a mechanical engineer by training, works with Melissa to translate qualitative data into tangible deliverables such as lo-fi prototypes. This gives traction to anthropological findings. Cefkin explains, “It would not work to just go to them with reports and ideas. We’re going to them with very explicit concepts or implications.” In this way, the perceived obstacle of contrasting worldview between qualitative and quantitative worlds can adapt to produce more valuable insight.

Logan McLaughlin, a Master’s candidate at the University of North Texas worked with Melissa over the 2015 summer as part of his graduate thesis. Studying the gestalt of the driving experience under her guidance, Logan has investigated how drivers, passengers, pedestrians, and infrastructures together create the complex whole of driving. He says that his experience with Dr. Cefkin has been “nothing but positive”. He appreciates her ability to embed herself within the company and inform not just the meta-level understandings but also produce concrete applications for the team. He notes that she affords a “grace to explore” allowing projects evolve naturally which has been especially valuable in their current project.

In the introductory chapter of her book, Ethnography and the Corporate Encounter: Reflections on Research in and of Corporations, Cefkin writes, “Ethical issues infuse every aspect of corporate ethnography” (2009:18). I asked her to talk about how this sentiment has applied to her career arc. She paused before answering, “I still wake up every day saying: I’m working for private interest—a.) How did that happen? It’s not what I would have imagined for myself; and b.) What is my accountability and responsibility there?” She explains that in all of her positions, she has grappled with the ramifications of working in industry. Melissa is candid: Whose interest am I serving? Who is going to benefit from my work? What are the deeper consequences of the project(s) I am working on?

In addition to these broad concerns, there are what she terms ethical issues as daily practice including sufficient protection and compensation for study participants. She adds, “I sure hope everyone who works and does a job stops to ponder on what they may be producing in their work that is unintended, undesired. Again, this isn’t unique to my situation.” Melissa reflects that when she first stepped into the corporate world, it was an uncomfortable experience. Today, the discomfort lingers in some ways. Working in corporate settings will always be slightly awkward as the anthropologist navigates between myriad obligations of researcher, employee, and member of society.

In parallel to this inner monologue, Melissa questions the claim that research is best conducted by an external entity. In fact, she suspects that the notion of a ‘pure outsider’ may be ill-founded. Instead, she suggests that valuable insight can and should be obtained from within. Melissa explains more pointedly that she’s “increasingly losing any hope” that sufficient change can be catalyzed from the outside and is motivated by the transformation she’s been able to induce while working inside an organization. She says that being at the table and offering guidance in everyday settings has had more impact than critique from afar. Although she acknowledges that some elements of her current work may have potentially negative impacts (such as the potential for autonomous vehicles to create job losses), there are also tremendous benefits. She is enthusiastic about the prospect of increasing safety and contributing to environmental health, and her involvement from the early stages of the development process provides an opportunity for Nissan to internally examine all of these issues.

As autonomous vehicles enter into our world, and as social conventions struggle to adapt to rapid technical change, we’re fortunate to have an anthropologist like Melissa on the inside.

Cefkin, Melissa (ed.)
2009 Ethnography and the Corporate Encounter: Reflections of Research in and of Corporations. New York: Berghahn Books.

Molly Shade holds an M.S. from the University of North Texas in Applied Anthropology. She is currently a User Experience Researcher for Hach, a water analyst company. She incorporates ethnographic and user-driven studies to inform product and service development for water technology.

RELATED ARTICLES
All articles are free; some require sign-in