[this is one of two posts on sensemaking; see also the companion piece Sensemaking Methodology by Peter Jones] 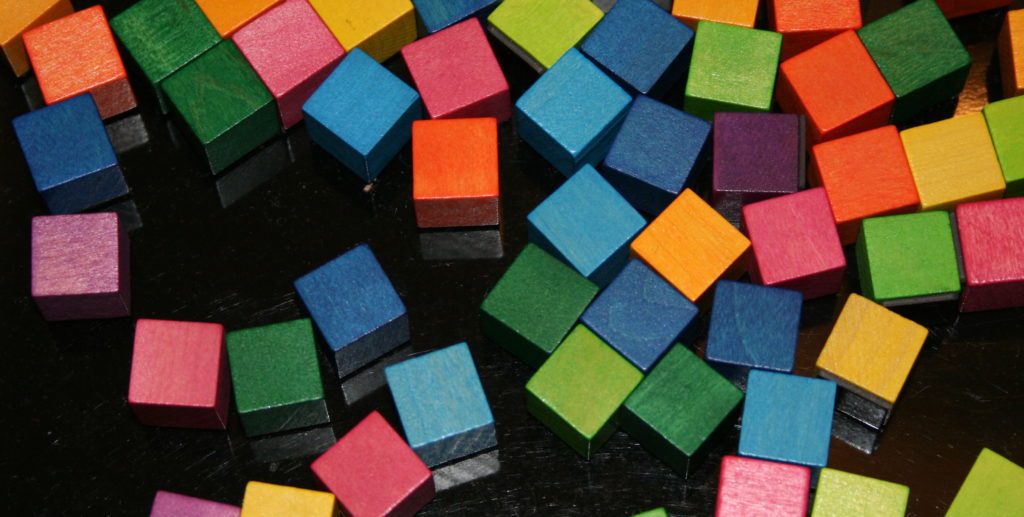 Sensemaking is a term that gets thrown around a lot without much consideration about where the concept came from or what it really means. If sensemaking theory is democratizing, that’s good thing. Most anthropologists recognize that ethnography is a joint co-creation with our interlocutors. Our accounts, as well as the theory, framework and methods underlying those accounts, should be accessible to the people who help us create them. Sociologists recognize this principle, too: in his gorgeous essay Social Things (which you should read if you haven’t already), Charles Lemert reminds us that social science articulates our native social intelligence through instruments of theory, concepts, methods, language, discourse, texts. Really good sociology and anthropology sharpen that intelligence. They’re powerful because they enhance our understanding of what it means to be human, and they really should belong to everyone.

Which brings me back to sensemaking: it’s one of those terms that lends itself to rapid adoption and application. It seems so easy to understand. It’s about making sense. Okay, that’s a tautology. How about this: sensemaking describes the negotiation and creation of meaning, or understanding, or the construction of a coherent account of the world. Right?

All of that is true, but there’s so much more. Over the past couple of decades, a small number of psychologists, communication theorists, and organizational scientists have articulated ideas of sensemaking into theories, frames, and methods that we can and probably should incorporate into our work. Sensemaking is more than a term of art: it’s an elegant, subtle, and richly descriptive body of thinking about human perception, cognition, and action, as well as social interaction, institutional reproduction and change, and human agency. I’m no social theorist, so take this with a grain of salt – but I think sensemaking is right up there with Pierre Bourdieu’s habitus or Jean Lave and Etienne Wegner’s communities of practice (both of which are consonant with sensemaking theory, but that’s a more complicated story). Sensemaking has tremendous implication for how we design and manage institutions, organizations, teams, programs, technologies. It’s also relatively accessible – at least, compared to my painful memories of slogging through Outline of a Theory of Practice. 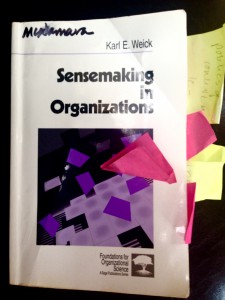 One of my favorite books about sensemaking is Karl Weick’s, Sensemaking in Organizations. I owe a debt of thanks to the nuclear engineer who suggested I read it. This was back in 2001, when I was at Los Alamos National Laboratory (LANL). I’d just finished my dissertation and was starting a postdoctoral position in the statistics group, and word got around that the laboratories had an anthropologist on staff. My nuclear engineer friend was working on a project examining how management changes were impacting team dynamics in one of LANL’s radiochemistry bench laboratories. He called me asking if I had time to work on the project with him, and he asked if I knew much about “sensemaking.” Apparently, his officemate had recently married a qualitative evaluation researcher, who suggested that both of these LANL engineers take the time to read Karl Weick’s book Sensemaking in Organizations.

My nuclear engineer colleague thought it was the most brilliant thing he’d ever read and was shocked, SHOCKED, that I’d never heard of sensemaking or Karl Weick. I muttered something about anthropologists not always being literate in organizational theory, got off the phone, and immediately logged onto Amazon and ordered it. I still have that same copy – it’s beat up, as all beloved books tend to be. I do enjoy rereading it because my lines, scribbles, and post-it notes remind me what I was thinking about at different points in my career.

Sensemaking in Organizations consists of a preface and eight chapters that set out the origins, principles, and applications of Weick’s sensemaking concepts. It’s worth reading just for the preface, which is delightfully welcoming for a volume of organizational theory. Weick advises novice sensemaking acolytes to expect some confusion: “You are being thrown into the middle of a sensemaking conversation with only a vague idea of how it constitutes a perspective,” he observes. Fortunately, sensemaking is nothing more than a scholarly articulation of something that comes quite naturally to us: we recognize, act upon, create, recall, and apply patterns from the material of our lived experience to impose order on that lived experience. Think of sensemaking as a “frame of mind about frames of mind,” Weick advises his reader. If this sounds recursive, it is: Weick tells us to learn about sensemaking by thinking about how we are learning about sensemaking. Read some of the text, he says. Set it aside. Consider it. Observe how you apprehend and integrate the ideas into what you already know. Articulate what you think you know about your learning. See that? That’s it. What you are observing and articulating is sensemaking in action.

Of course, there’s a great deal more to sensemaking than that – some two hundred pages worth of ideas in just one of Weick’s books; and Weick is just one of a dozen or so people that I can think of who are affiliated with the idea of “sensemaking.” Within organizational theory, Weick was the first to articulate sensemaking as a coherent framework for perception, cognition, action and memory, but he locates his ideas in nearly a century’s worth of scholarship (see pp. 65-69 in particular). Weick’s achievement is to take a breathtakingly broad array of ideas – Emily Dickinson, Anthony Giddens, Pablo Neruda, Edmund Leach – and craft these into a set of seven properties that we can use to understand how we create order from the flood of sensation we experience every waking moment of every day.

Chapter Two of Sensemaking in Organizations contains what is perhaps Weick’s most cited sentence, the recipe for sensemaking: “How can I know what I think until I see what I say?” This rubric captures the seven constituent ideas of sensemaking as emergent interpretation, which I’ve put into my own words below. I’ve italicized the key terms that Weick uses to represent his heuristics:

Let me reflect on how I put these ideas into action in relation to my own lived experience.

What I’ve just written above is an articulation of my identity as a researcher and thinker, as an organizational anthropologist raised in a family of teachers and social scientists. Right now, I’m conscious of writing for an audience of ethnographers, some of whom I know quite well and others whom I have yet to meet. I’m aware that I’m only scratching the surface of sensemaking theory. My readers are in my mind as I write; what I put on the page is shaped by my expectations about how you might interpret what I’ve written down. This account is a necessarily incomplete, inaccurate, and fixed representation of my own embellishment of concepts and ideas extracted from a book I’ve been rereading on and off since 2001. I’ve thought about Weick’s ideas in my own peregrinations since first reading Sensemaking in Organizations and my current understanding of his work, and how it should be articulated for a blog post, are shaped by what I know about organizations, ethnography, and blogs – among other things. As I write, I am trying to deploy language, grammar, syntax to convey my felt sense of these ideas. In doing so, I’m learning for myself what I believe to be true about Weick’s work.

In terms of my ethnographic practice, I find sensemaking theory to be a tremendously powerful guide for structuring my approach to qualitative data collection, particularly when I’m trying to figure out how an organizational initiative is (or isn’t) making the impact that its proponents have envisioned. For example, back in 2008, my colleague Nancy Dixon and I did a brief study—just a few weeks—examining how intelligence analysts were responding to the introduction of Intellipedia, a wiki platform intended to promote knowledge exchange and cross-domain collaboration across the United States Intelligence community.1 All seven of the themes I’ve described above were salient in the observations we collected from our interlocutors, but the one that really jumped out for me was identity, the idea that social media in the context of the intelligence community was catalyzing thoughtful consideration of practice, knowledge, and professional self among Intellipedia’s early adopters. As we analyzed our interview and observational data, we came to believe that Intellipedia and other forms of social media were disruptive not because they facilitated domain knowledge sharing per se, but because Intellipedia was enabling its contributors make more effective sense of themselves and their expertise vis-à-vis the massive, complicated organizations in which they work.

I’m at the end of this post. In my next post about sensemaking, I’ll write about the failures of sensemaking that Weick documents in his retrospective accounts of the 1949 Mann Gulch fire and the 1977 Tenerife airline disaster. They’re chilling, sobering, and richly scholarly case studies—if you ever needed an argument for the value of qualitative research, these two essays are a great start.

In the meantime, spend the twenty bucks on Karl Weick’s book, if you haven’t already. If you’re another fan of sensemaking theory, I’m sure my friend Jennifer would be thrilled if you’d write your own blog posting about sensemaking. I’m most familiar with Weick, but Gary Klein, Peter Pirolli, and Brenda Dervin are all associated with sensemaking as well. Perhaps we can collectively engage in making sense of sensemaking for ethnographic practice in science, technology, and industry. It’s wonderful stuff.

1. Dixon, N. and McNamara, L. 2008. “Our Experience with Intellipedia: an Ethnographic Study at the Defense Intelligence Agency.” Albuquerque, NM: Sandia National Laboratories, SAND 2008-2187.   More information about Intellipedia is available at the CIA’s website: https://www.cia.gov/news-information/featured-story-archive/intellipedia-celebrates-third-anniversary.html. You can also check out Nancy Dixon’s portfolio of work on social media, the intelligence community, and organizational sensemaking at http://www.nancydixonblog.com/.

Laura A. McNamara, PhD, is an organizational anthropologist and Principal Member of Technical Staff at Sandia National Laboratories. She has spent her career partnering with computer scientists, software engineers, physicists, human factors experts, I/O psychologists, and analysts of all sorts. Most of her projects involve challenges in analytic technology adoption. She enjoys working with computer science and software teams in design strategies that enhance the future usability, utility, and adoptability of analytic software. She is co-editor of Anthropologists in the SecurityScape and Dangerous Liaisons: Anthropologists and the National Security State, and lead editor of the Elsevier Science Publications series Studies in Multidisciplinarity.

6 comments for “Sensemaking in Organizations: Reflections on Karl Weick and Social Theory”