[this is one of two posts on sensemaking; see also the companion piece Sensemaking in Organizations by Laura McNamara] 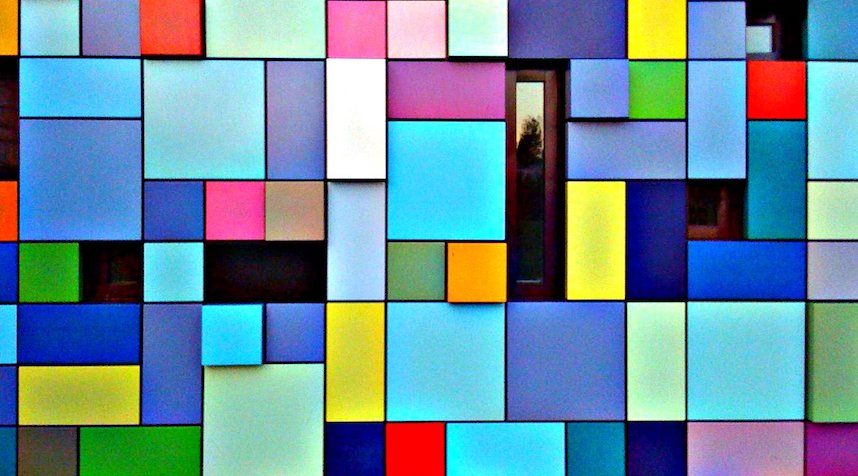 I’ve seen a lot of methodology fashion come and go. Before completing a doctorate that really anchored my work in ethnography, I was trained as a cognitive psychologist, designing and evaluating user experience for software and information technology. Since the 1980s, I’ve watched methodologies emerge, some becoming fads and others disappearing from the canon. I’ve learned and applied methods consistent with the theoretical commitments and practices of a methodology. My experience with sensemaking methodology has a long timeline, which relates to how we establish “methodological commitments.” This post explores those commitments and major developments and types of sensemaking methodology.

As an early usability methodologist – I was trained in IBM and built a few labs before Microsoft had labs – I explored the full range of applications of lab and field usability method. As a graduate student and software interface designer in the DOS and mainframe years, I ushered in usability evaluation as methodology, as a scientifically validated system of practices and methods. We had huge commitments to the methodology – we built $5K labs, $20K labs, and field-testing kits; one of my projects resulted in a million dollar university lab, in 1990.

Methodologies are like thinking paradigms for research, and create a coherence of organized thought over long periods of time. As researchers we develop our own coherent logics for integrating these methodologies – in private sector work, we tend to adapt multiple methods and sometimes cross methodologies. For EPIC people, avowed ethnographers, I suggest we consider a whole-system view of methodology – expressing the philosophical, instrumental and normative perspectives.

I view methodology as a cohesive framework constructed from a declared scientific body of knowledge and the intrinsically related philosophy, interests and values, and methods associated with that knowledge discipline. While this view is close to the (unusually good) Wikipedia definition, my thinking about methodology was deeply influenced by Brenda Dervin, in whose seminars on Sense-Making Methodology I recognized methodology as discipline, practice and theory base. Then, perhaps like Moliere’s Gentlemen who discovered he had been speaking prose all his life, I realized I had been a methodologist all my career.

Of the several sensemaking methodologies published over the years, only Brenda Dervin’s has been developed so methodically as a project. In teaching and research, she developed the Sense-Making Methodology (SMM) on a career-long scale of intellectual commitment with continuous theoretical development and reflexive review. From earlier work to later, the methodological unfolds into the theoretical, revealing the SMM project as a longitudinal work of critical theory and practice, and a proposal for an integrated view of human agency. Sensemaking is revealed as a theory of understanding communication as a means of empowering people.

Sensemaking (with or without the hyphen) is methodology, as Dervin has indicated with her framing. Each of the major contributors to sensemaking theories – Brenda Dervin, Gary Klein, Karl Weick, David Snowden, and Russell, Pirolli and Card have established different perspectives on sensemaking, each of which aligns to different human science philosophies, theoretical commitments, and normative perspectives. There seems to be no overarching sensemaking umbrella that neatly fits these together – a point Dervin has made. The models of sensemaking describe different “ways that people make sense of things” and because they have different units of analysis, it may seem that ethnographers could merely adopt the best model for the unit of description. Perhaps at the risk of over-simplifying, each methodology can be seen as describing a different unit of analysis, of internal or external representations of meaning, and of more of an individual or collective interpretation of outcome of sensemaking as “observed.” 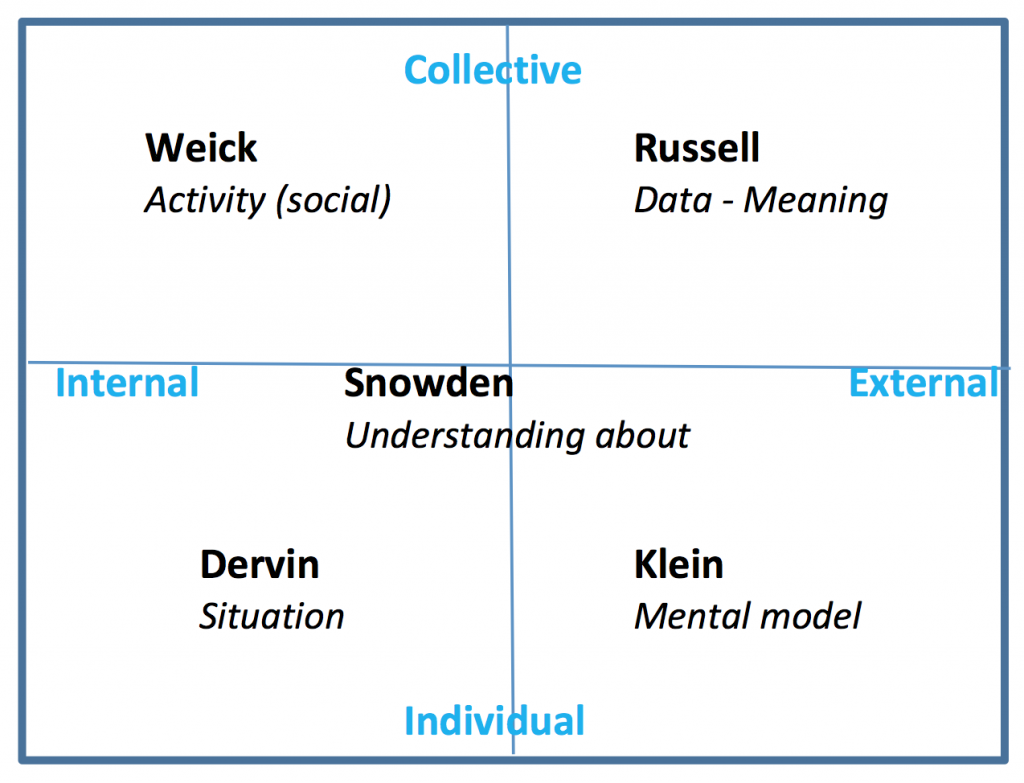 The four major sensemaking theorists focus on different units of analysis of sensemaking in their studies. The 2x2 is an attempt to locate the different units of analysis across individual or collective locations of sensemaking, and across internalized or external applications or focus. Weick’s focus has been organizational activity (collective), and the location of sensemaking is internalized as representation of collective meaning. Dervin has a clear individual and hermeneutic approach, on the individual’s situation and their internalized subjective experience of it. Klein’s focus is the individual mental model (frame) applied to an external context or activity (how external data is represented). Russell’s information theoretic view establishes sensemaking as a collective location (an information world) largely in the service of interpreting external data. Snowden’s more evolutionary model considers sensemaking a knowledge production activity, using data toward a shared understanding of problem areas (which I call “understanding about” as a unit of analysis).

Key articles that define the methodological perspectives and units of analysis include:

Dervin reinforces the mandates of methodology, which is not about pedantic enforcement but prevents fixation on method. Method is instrumental, and when employed strictly for data collection, becomes a toolkit applied to research problems. Methodology is not just academic: it enables a context for reflection on purpose, meaning, and selection of methods in support of interpretation of complex human problem situations. Dervin constantly reminds us that methodology “mandates attention” to the purposes and motivations for research itself, and while methodically rigorous, Sense-Making as method leans toward a commitment to understanding and promoting agency, an emancipatory research aim, that liberates both subject and researcher in the communicative process entailed in a Sense-Making journey.

Dervin describes her position as post-critical. Her methodology invokes Gramsci, Foucault, Freire, and Bourdieu, sometimes within a simple presentation of Head, Heart, Hand, Habit, and Hegemony. She proposes a method for understanding power relations by formulation of the “dialogic surround.” The surround can be seen as a triangulation of multiple perspectives on a shared concern, increasing the requisite variety of dialogue to enable holistic understanding and the interactions between individual concerns that reflect different lifeworlds and value positions. Dervin’s essential position for methodological rigor is based on the premise that “spontaneous communication procedures usually implement extant power arrangements. Major emphasis is placed on interrupting this hegemony with disciplined and dialogic communicative design based on sense-making principles” (Dervin and Naumer, 2009). We can take this to mean that when we interview or communicate with participants in unreflective or unstructured lead-following approaches, the risk exists of reproducing power embedded in our assumed interests. This release of structure re-includes the hegemony of power assumed within the context of “doing research,” and paradoxically that power is balanced by establishing a discipline that affords participants the structure.

Drawing from critical theory, the SMM pierces conventional notions of human experience by invoking and identifying sense-making and un-making functions, including:

Dervin’s work explicitly addresses power and feminist discourses from critical theory, which she integrated into SMM after its initial development in the 1980s. (The theoretical development of SMM is transparently presented across a continuous stream of published articles). Close reading of her work reveals an American critical theorist that aimed SMM at the potential for critiquing and revealing power relations in knowledge practices. In her talks, “power” is often the main point, and reflective individual agency is a primary actor and enactment in the discovery and liberation of personal knowledge.

I have employed Dervin SMM sensemaking in numerous user studies over the years, and find it especially useful in information seeking and use studies, a specialty of my design research practice. Its interpretive power strongly informed a 2008 study on academic eBook use, which blew apart the emerging mainstream myth that eBooks were quickly replacing print textbooks and academic monographs. At a large university research library, my surveys were showing a significant growth in eBook search and retrieval statistics, even though preference compared to electronic journals remained fairly low. Conducting sensemaking journey studies with students and faculty we discovered that users were locating eBooks in searches, but were dismissing them upon very quick evaluation as being unsuitable to the information need, difficult and unwieldy to read, inadequate selections, and so on. I used a neutral, situation-centered interview that disrupted any biases toward eBook preference that were presumed in the context of the research setting (there was such a bias we had to counterbalance). Dervin’s methods focus on locating authentic situations which surface meaning through discovery of “gaps” and discontinuities in information experience. Different forms of help and support-seeking are located in the subjective journey. This unit of analysis, interrogated by Dervin’s micro-moment analysis, was analyzed to identify the “gaps and helps” associated with seeking resources for a real situation.

The research discovered some fundamental processes that reached well beyond the question of eBook preference in information seeking for academic problems. It revealed deeper issues of context and information content types that differed by discipline and problem type. Even if all possible books were accessible as eBooks, there were enduring preference and needs for print forms. Since this study was conducted well before the general public adoption of the Kindle and other eReaders, which were not even available in Canada at the time, there was considerable skepticism about the sensemaking research. I was using an approach not well understood by sponsors and advisors, and these sponsors were quite invested in the belief that “eBooks were the future of the library.” Such disparities can lead to considerable distrust, when findings fail to support the expected hypothesis – and this could perhaps be a risk for the researcher’s reputation when using truly neutral, power-minimizing methods such as this. However, in the years since 2008 continuing studies have proven this original work largely correct and well ahead of its time. Significant cognitive and “sensing” barriers to intellectual comprehension have been discovered in eBook interaction, not insurmountable but still preventing their adoption as hypothesized eight years ago. Sensemaking research is able to discern these deeper issues within an ethnographic context, by sharing power with informants and participants in the journey of understanding.

Methods such as neutral interviewing or sense-making micro-moment analysis are ways of enacting self-reflective communication. These are not merely methods for data collection, they are truly co-creative and communicative. These methods have real implications for ethnographic methodology, not as methods per se but as resources for empowering communicative agency and restoring power equity within ethnographic research encounters.

Peter’s recent Rosenfeld book on healthcare design, Design for Care, matches methods uniquely suitable to the cases and applications across the different sectors of healthcare innovation. Among these, Design for Care includes ethnography, critical heuristics, Dialogic Design, and Dervin Sense-Making Methodology, each within a different chapter where they fit the cases and problems of that area, whether clinical service, health IT, or patient-centered care. His other books include We Tried to Warn You (Nimble Books, 2008) and Team Design (1998, 2002). His research and trade articles can be found on designdialogues.com.