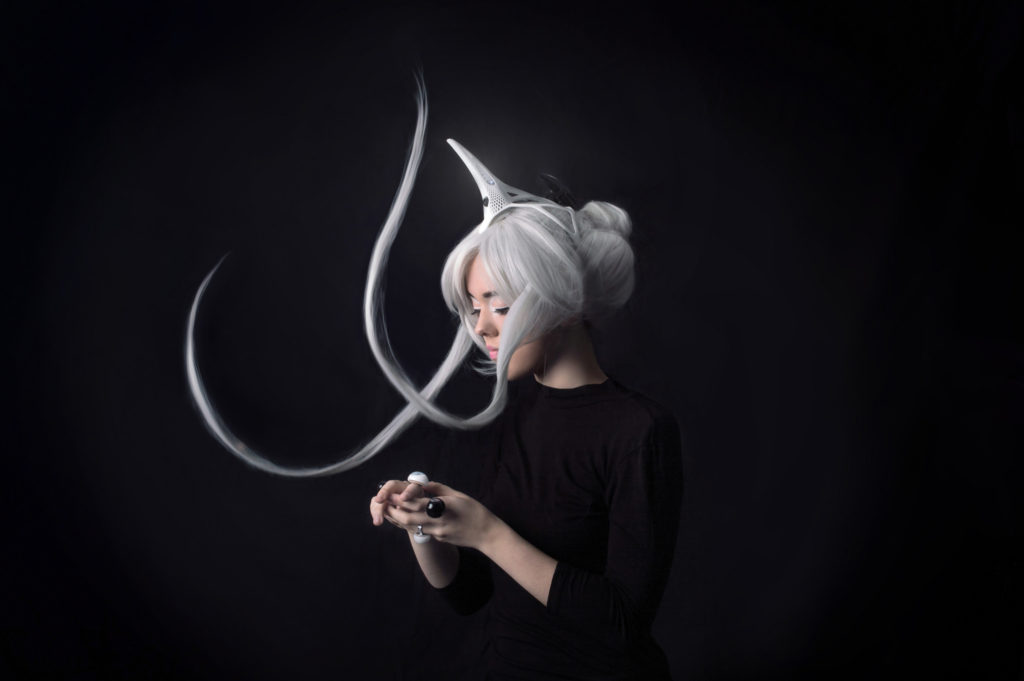 These days a wide range of new digital products are being lumped together in the much-hyped category ‘Wearables’—heart-monitoring shirts, shoes that monitor muscle fatigue, smart watches of all sorts. What’s new about these products is their digital characteristics, but what's really interesting about them is that the category itself is actually very old. The essence of wearables lies not in their new digital functionalities, but in the social relationships they mediate and the behaviours they celebrate. They touch on ideas of what it is to be properly ‘human’ and where the boundaries of humanity lie.

Even very basic wearable technologies—clothing, jewelry, a wooden tooth or prosthetic leg—have always been bound up with the art of technique: ideas, behaviours, and materials come together on our bodies so as to mediate our human condition. Each has its own evolving cultural norms: just think of variation across time and culture of tattoos and body piercings, the favorite paper topic for anthropology undergraduate students.

Today's wearables, now infused with digital capabilities, are re-animating age-old questions about human bodies and the human species. How are wearables augmenting, alternating, or extending a body’s natural capacities to act and to be affected? What is a natural body to begin with? How do wearables alter the capacities of an individual body within the larger context of the globalized, digitalized and uber-capitalized society, including large scale social engineering?

These questions cannot be answered by the ‘users’ of wearables alone, or through the rapid user research and optimization of user experiences generally practiced by companies racing to develop new wearable products. We need analysis informed by anthropology and related disciplines to explore the role of material technologies in our lives: Why should we want to modify or augment whatever capacities we have as human beings today? Which capacities do we want to modify, and how?

Anthropologically informed ethnography enables us to build new ways to innovate within the category. Ethnographic research helps reframe wearables – in people’s terms, and in culturally resonant ways – by challenging standard innovation practices that focus on technological functions and forms, and redefining design targets around what people find relevant and valuable. These new culturally relevant design targets are valuable for:

Wearables should not be defined primarily through their form (technological objects one can ‘wear’) or technical functions (tracking, nudging, reminding). We can develop more useful insights about the role of these technologies in our lives are when we conceptualize wearables in terms of the relationship they have to our bodies, social selves, and our personal identities. Every wearable and object holds the promise and potential to mediate the relation to the self as an embodied being; social relations of belonging; and autobiographical relations.

The most popular wearable technologies today center around discipline and control with the goals of self-enhancement and optimization. In 2016, Mike, a 50 year old man I interviewed in New York City, expressed disappointment in his Apple Watch: “I wish it did something to me, would get me to train more. But it’s mostly good for checking out time and silencing incoming calls”. The promised change in lifestyle didn’t materialize. But even more important, Mike’s comment reveals something about the relationship between the wearable device and the wearer; the idea of optimization of the flesh effectuated from outside is about technological mediation of the fragile link between morality and the body.

For Sam, 30, a practicing American Sikh living in Los Angeles, wearables are not so much about bodily self-enhancement. Instead, showing us the silvery Kara bracelet around his wrist, he told us, “it keeps me handcuffed to God, keeps me on the right path, it’s part of me always”. For Sam, the bracelet operates as an ever-present tool for the moral guidance and direction promoted by Sikhism.

Our conversation with Dione, a 31-year San Franciscan, revealed how dressing is a technology of control because the standards for certain occasions are set by someone else. Dione loves color but looks at what her colleagues wear and wears muted tones to work. She has adopted the saying, “Dress for the job you want, not that job you have”, and makes sure to exude professionalism. For Dione, clothing is the wearable technology for augmenting her appearance to adhere to the norms of a social hierarchy.

Wearables as Technologies of Belonging

Communities are already forming around self-optimizing wearable tech. Many self-trackers view themselves as part of a bigger community in what Lupton (2014) calls ‘communal self-tracking’, generating a new form of biosociality through communities emerging around new biological identities (Rabinow 1992). In this way, wearables become entrance points to what Benedict Anderson (1983) calls ‘imaginary communities’, communities created by mental imagery of affinity. They become part of a system of other wearables on the body of the wearer, but also a symbolic system to which it grants access.

Yao, a 32-year woman living in Beijing, proudly showed me a brightly colored padded jacket, explaining, “This is my tailor made jacket, I wear it when I go on these bike rides with my friend. He has a Harley-Davidson”. Ying uses her jacket for self-expressive reasons, becoming a part of a symbolic community with certain values and preferences.

Wearables, like all other objects, already have the inherent promise of opening up to social systems and imaginary communities. Beyond the goals of self-optimization and tracking, then, there is great potential for wearables to explore culturally relevant space where a number of ‘old wearable technologies’ already mark boundaries—for example, in the way specific leather jackets mark bikers. The space of belonging and imaginary communities presents a largely untapped potential for ‘wearable technology’, though some companies have tried their luck here (e.g., Intel’s MICA bracelet) and failed. Why?

Wearables generally they support an instrumental view of the individual rather than, for example, playing around with the norm of seasonality that is so important to fashion (Ryan, 2015). For wearable technology to be able to truly work within the system of people’s everyday lives, it needs to acknowledge the potential to work as a marker of symbolic fashion systems. And to be really considered as ‘fashion’ or (body) ‘art’, the production and contextualization of wearable items need to adhere to the rules of the fashion and art worlds. This is because access to and the right to claim the status of ‘fashion’ or ‘art’ are both culturally limited to particular institutions, people and locations (see e.g. Becker 1982). Design philosophy cannot solely rely on perfecting functionalities – such as heart rate or movement tracking – the way most popular wearables now do, but needs to offer clear symbolic value.

Wearables that are autobiographical become companions to our emotional lives and provoke thought over extended periods of time. They embody thoughts, memories and feeling for a relationship that they stand for as technological tokens. Some wearables come to represent and embody love toward a singular person or object, a technology of relationship, continuity and emotion; the wearable manifests a coherence of the self. It is a personal valuation that removes these objects from the objective commodity pathway.

Autobiographical wearable objects primarily gain their power from the specific situations and circumstances through which they enter into and remain in the life of their owner. It is easy to see that this is true of old objects and heirlooms that are already singular, evoking memories and particular emotions. However, new objects can also become evocative or personal. They can shift in value from economical to affectional, withdrawing from the market (Appadurai 1986; Kopytoff 1986). Brands such as Patek Philippe, the Swiss luxury watch maker, proves that it is possible to manufacture wearables that are perceived to have almost inherently timeless qualities. Their power is supported by both long-lasting functionality and clever branding: “You never actually own a Patek Philippe, you merely look after it for the next generation” (Patek Philippe 2016).

A hallmark of digital technology is the fast replacement cycle, propelled by the rapid development of processors, sensors and battery technology. Its lifespan is too short to become autobiographical; it never has the chance to become an evocative object. It remains a commodity in the market, never escaping value judgements and comparison to other objects currently in the market place.

The notion of wearables as autobiographical objects is profoundly linked to sustainability and a continual relationship with the same technology over an extended period of time. Wearable technology understood as autobiographical objects is a sustainable design space that is opening up new meanings and potentials of how the category can evolve to enable people to better understand and situate themselves in the world. Hopefully we will soon see wearable technology that is able to take a cue from Patek Philippe and once again let ‘the next generation’ be framed within the trajectory of the family and interpersonal relationships, rather than the newest update in a product line, ready to become trashed upon the next upgrade release.

What Is at Stake

When it was introduced, the Apple Watch promised to nudge the wearer (assumed to be an office worker) to change positions every 30 minutes, literally promoting a change in the bodily practices of its wearers. Within the Quantified Self movement, users are measuring everything from sleep patterns to quality of air, as the data gathered by wearables allows them to change their behavior in order to self-optimize. The rise of the ‘wearables market’ brings this blurring of boundaries between humans and technology to everyday consumers: it has been recently estimated that in 2020, 411 million wearables worth 34 billion USD will be sold globally, with wrist-based devices such as smartwatches and fitness trackers dominating the market (CCS Insight 2016). Wearables are a major technological driver that encapsulate a techno-determinist ideology determined to change human behaviors across the globe.

This is exactly why the question of wearables—what they are, how we should think and live with them—is really a question about future of human beings with augmented bodily capacities, both at individual and species levels. What is the implicit (or explicit) vision of the human that we are trying to augment? Why do we want this change, and through which technological means do we aim to achieve it?

Ultimately, when we, as anthropologists, developers, designers and consultants, define ‘wearable technology’ as a category, what is at stake are the limits of our cultural imagination, the logic of our research strategies and analytical categories, and their fit with the human needs we seek to identify in order to inform the development of new wearable form factors, algorithms, and overall design patterns affecting their wearers in everyday life.

For a more extended version of this research and analysis, see “The Anthropology of Wearables: The Self, The Social, and the Autobiographical” by Sakari Tamminen and Elisabet Holmgren.

As co-founder of Gemic, Sakari Tamminen leads innovation projects for technology-driven companies, with a particular focus on product and service development, brand strategy, and future studies. Sakari holds a PhD in social psychology and anthropology of science and a Pre-Doctoral degree in User-Centric Design.

The Anthropology of Wearables: The Self, The Social, and the Autobiographical, Sakari Tamminin & Elisabet Holmgren