The Labor of Care: Filipina Migrants and Transnational Families in the Digital Age
Valerie Francisco-Menchavez
2018, 256pp, University of Illinois Press 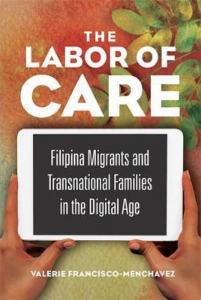 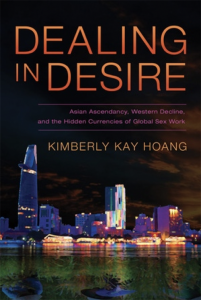 The March 16 shootings in the Atlanta-area of Georgia in the southern United States, when a person shot dead eight people, including six Asian women, sent me into deep grief. I could barely register the text messages from concerned friends recognizing me as an Asian woman and offering support. Trying to muster the focus to work the next day, I felt the urge to mute the Slack streams of sincere acknowledgements and thoughtful compilations of Asian American Pacific Islander (AAPI) resources shared by co-workers. Alongside my grief, I was frustrated by the meager news coverage of the people—and specifically the Asian women—who were murdered. There seemed almost nothing to know about them.

When I stepped outside the next day, my Chicago neighborhood was dotted with news vans. In my community, the main business district is named, with a luminous red sign, Asia on Argyle. Argyle Street is lined with Asian immigrant-owned and primarily Vietnamese businesses. That day, I gave an interview to an NBC reporter a few blocks from my home—for once I wasn’t the interviewer myself—where I spoke not about the banality of evil but the banality of Asian hate.

That weekend, I realized that what I was acutely missing in the coverage of the Atlanta-area shootings were the core ethnography: reflexivity, embodiment, and thick description. I was still feeling the heaviness of grief, so I isolated myself for the weekend and turned to two ethnographies I had been wanting to read: Kimberly Kay Hoang’s Dealing in Desire: Asian Ascendancy, Western Decline, and the Hidden Currencies of Global Sex Work and Valerie Francisco-Menchavez’s The Labor of Care: Filipina Migrants and Transnational Families in the Digital Age.

In many ways, these ethnographies are completely different endeavors. The authors, academic sociologists, explore separate cultural and cross-cultural contexts with distinct frames and their own ethnographic methods. The overlap between the two ethnographies is their focus on Asian women who work service jobs in complex global economies where distinctions between agency and exploitation are tenuous.

My first thought when picking up Dealing in Desire, knowing that it was written by an Asian woman, is that it would in some way challenge the widespread hypersexualization of Asian women who perform service work and specifically body work. I was looking for alternative narratives to stories about the Atlanta shooter’s sex addiction and characterizations of the spas, their services illicit in the vagueness of the news coverage.

In Dealing in Desire, Hoang examines the sex industry in Ho Chi Minh City during approximately 2006–2010, a period of rapid economic growth in Vietnam, through ethnography situated in four different types of bars, catering to four categories of clientele:

During Hoang’s extensive field work, she conducted research as a participant-observer at one of each type of bar. She worked as a hostess and bartender alongside sex workers, speaking with them, clients, “mommies” who ran the bars, and bar owners.

Hoang helped me understand that the desires of mommies and sex workers in her study included impressive ambitions that looked forward and back in time, place, and the women’s relationships. Ambitions took into account where the women came from (mostly from either poor villages or poor parts of cities) and therefore what long-term security might mean. Hoang presents numerous stories of women who leveraged their earnings from direct sex work, business and political connections made in bars, and remittances from clients to establish their own successful businesses, invest in real estate, and create opportunities for upward mobility for other women. The author concludes the chapter “Entrepreneurial Mommies” by saying that these women “played a vital role in developing their nation by facilitating the flow of major sources of capital—FDI [foreign direct investment] and remittances—thereby transforming much of the country by means of the world of commercial sex work” (p 103). Hoang made real for me the layered and globalized dreams of women in a stigmatized profession in what the West typically deems the Third World.

Contrast Hoang’s ethnography with the snippets about the Asian women killed in the Atlanta-area spas. Reports tell us that Xiaojie Tan, for example, owned two businesses—without any further detail. What were Xiaojie Tan’s dreams? What did success mean to her? In the absence of thick description, most people are left to imagine how the Asian women who were murdered on March 16 worked in back rooms of strip mall businesses servicing white men resembling their killer.

Valerie Francisco-Menchavez’s The Labor of Care: Filipina Migrants and Transnational Families in the Digital Age

What I sought in reading Labor of Care were ways of further considering invisible labor and the workers rendered invisible as a result. I had read brief testimonials from some of the children and friends of the Asian women who were killed in the Atlanta-area spas. The presentation of those testimonials gave me the same impression as stock photography, of universalized and even saccharine images. Was there more to their networks of kin than the Western, white supremacist definitions of family imposed on profiles proffered by news outlets? Beyond who we in the West consider next of kin, who are the people now missing the women who were killed?

Francisco-Menchavez’s ethnography is a transnational study of the experience of women from the Philippines doing domestic labor in New York City and their constellations of family and friends in the early 2010s. I expected to feel more personal connections to Labor of Care than I did reading Hoang’s ethnography.

My parents are Filipino immigrants who came to North America for work in the 1970s. Thanks to my parents, I have a native ear for Tagalog and read it fully though slowly, as the interview excerpts throughout Labor of Care reminded me. My life has all of the trappings of the model minority fairy tale, but that isn’t true for everyone in my family of the same generation. Low-wage service work in the form of nannying, eldercare, and entertainment is more common among relatives than my hoodie-wearing, AirPod-popping, white adjacency-thriving tech worker scenario. When I heard that spas were the sites of the Atlanta-area hate crimes, I thought of my relatives who in various settings are paid to provide comfort.

Unlike Dealing in Desire, it turns out that the focus of Labor of Care isn’t the paid domestic duties of Filipina women. I was somewhat surprised that Francisco-Menchavez’s  book for the most part reveals little about the tasks and interactions that comprise the women’s New York City jobs. What the author advances is a theory of multidimensional care to describe the care offered, received, and sustained among the migrant workers, other Filipina migrant workers, and their networks of kin including blood relatives and chosen family. She stresses that the Philippines’ export of labor shapes the lives of fathers, children, and other people who take up activities in the home after migrant workers leave their country.

At the same time, Francisco-Menchavez makes clear that the constellations of people that extend from migrant workers are suffused with agency. Kin, including children, make conscious choices about the ways they give and receive care. In the chapter “Skype Mothers and Facebook Children” and elsewhere in the book, the author details the ways the networks of Filipina migrant workers make use of technology. These involved applications are expressions of agency that receive scant attention in critiques of platform and surveillance capitalism.

Francisco-Menchavez begins by outlining Filipinos’ early and creative use of text messages. She continues with a discussion of newer technologies, highlighting particularly the opportunities created by the visual and aural channels of mobile and computer cameras. Striking are the types of sharing over social media that the author delineates, including passive sharing of household sounds and movement, embodied sharing of growing children’s bodies, and instruction related to chores and technology. Put another way, Filipina migrant workers’ networks are sites of extraordinary innovation. I recall discussions by Clapperton Chakanetsa Mavhunga and Xiaowei Wang about the colonialist gatekeeping of innovation and wonder what else goes uncelebrated because we as a society refuse to see some people, even after their headline-making deaths.

Reading Dealing in Desire and Labor of Care helped me process my grief in the days and weeks following the Atlanta-area shootings. These ethnographies provided nuanced takes on reflexivity, embodiment, and thick description that helped animate a group of people— Asian women in service jobs facilitating complex global economies—who the media at best will tell me were reliable workers and at worst assume they were merely wares of the sex trade. These ethnographies illuminate the ambitions, acumen, networks, and foresight of groups of Vietnamese sex workers in Ho Chi Minh City and Filipina domestic workers in New York City.

I am a better researcher because of the ways we in the EPIC community problematize concepts like reflexivity, embodiment, and thick description. May we never stop asking hard questions. Reading these books following the Atlanta-area shootings, I re-learned that there is inherent value to these tenets, to immersion in people’s richly layered lives and the meaning they make on their own terms. We as practitioners of ethnography, perhaps especially in the most trying moments, have the skills and abilities to surface stories that the world might otherwise go without.

Sharon Bautista is a UX researcher and community organizer based in Chicago. Her interests include organizational design, vocational work, and financial inclusion. She is currently on the Firefox team at Mozilla and is an industry mentor in the Master’s in Learning and Organizational Change program at Northwestern University.

What Do Science, Technology, and Innovation Mean from Africa? by Aderayo Sanusi

Designed for Care: Systems of Care and Accountability in the Work of Mobility, Erik Stayton and Melissa Cefkin

1 comment for “Ethnography for Sensemaking in Times of Trauma”