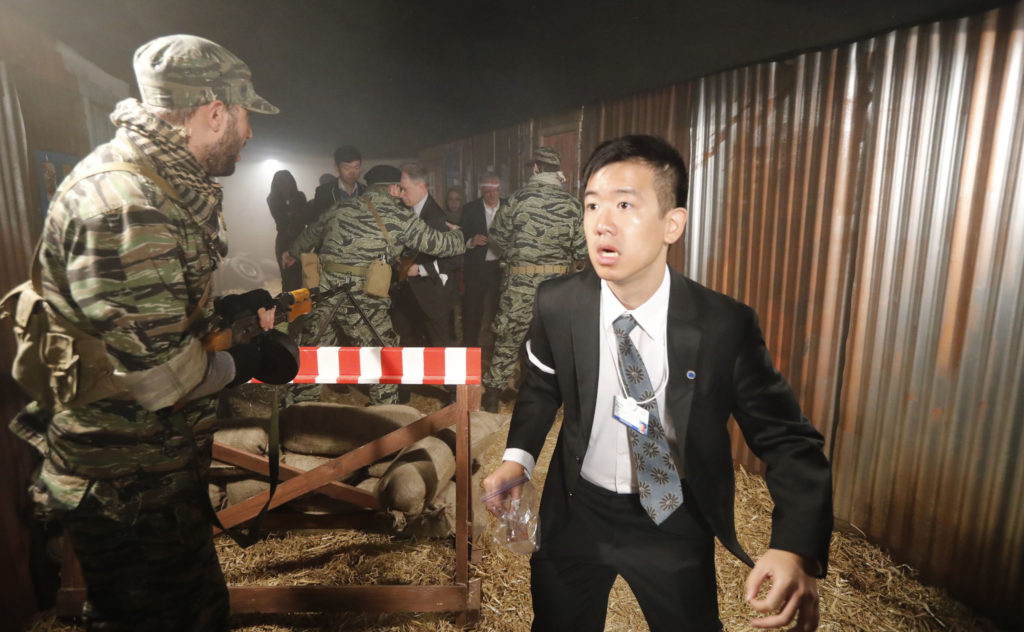 The news on BBC Radio this morning: The Syrian crisis enters its seventh year with 400,000 dead and little hope that this complex catastrophe will be untangled any time soon. The scale of suffering is huge, but Syria accounts for just a fraction of an even more staggering number – the UNHCR estimates there are 65 million refugees or internally displaced people worldwide.

Like many others I watch the steady stream of grisly news from Syria – it comes to us in facts, figures, infographics, human stories and historical comparisons. I've been shocked. But I am also inoculated. Whatever the quality of the reporting, however harrowing the scenes, our attention moves on. It is difficult to truly grasp the scale of what we have seen, hard to understand what it must be like to be a refugee. In an age when a seemingly limitless amount of information is at our fingertips, when we can know more than ever about events around the world, we still fail to understand.

Here’s the challenge of contemporary life: Although we know more than ever, there is an understanding and empathy gap. We live data rich lives but struggle to make sense of the data. The screens that are our portals to all this information also act as partitions to the world beyond.

In a world of information opulence we can know something without having a feel for what it means. A company may have millions or billions of data points about its customers, but does it understand its customers? Routinely, corporations demonstrate that they do not. We have stacks of data and feel nothing at all. We are left comfortably numb.

The answer to the challenge of knowledge without knowing and data without understanding is not more data. It is not even better presentation or communication of data and insights, as I recently argued. As researchers who seek understanding, we need to get more visceral, not more cerebral. More experiential, less intellectual.

How to Ride a Bicycle

The mind-body dualism is thoroughly entrenched in society, the current popularity of mind-body yoga and decades of critique leveled by philosophers and anthropologists notwithstanding. The idea that the mind and body are separate, even competing entities has buttressed the notion that knowledge is all in the mind. We tend to see the body as a transportation mechanism for the thing that really matters.

Just reflect on your own experience, though, and you’ll see that this makes little sense. Ever stood blankly in front of an ATM, unable to recall your card number, then put up a finger to accurately punch the numbers in the air? Looked away from your keyboard, continued typing and realized the words your keying are all spelt correctly? That's embodied knowledge. In the words of Merleau-Ponty, it’s a case of ‘I Can’ not ‘I Think’.

Similarly, if you can ride a bicycle you possess a complex skill that is extremely hard to explain using words. Knowledge of bike riding cannot be replaced by thorough instruction in the theory of bicycle mechanics. And what a researcher hired by a bicycle company would want to get from research is to understand the experience of cycling. But too often, what researchers produce is an account of Derailleur gears as explained by the words of others, not an understanding of experience. Embodied knowledge is not accessible through mere Q&A.

Anthropologists are committed to learning through engagement and first-hand experience because we understand that people learn by doing, by embodying other people’s tacit knowledge. If you want to understand what makes other people tick you can’t just rely on data, experts, the opinions of others, or even solely the words of the people you’re trying to understand. You’ve got to go there. You’ve got to engage your body.

In the basement of a Hilton Garden Inn global business leaders are having their identification papers confiscated. They are stripped of their expensive watches and money and given new identifies. During a nighttime raid a female participant is harassed by armed soldiers dressed in fatigues. By day they have to negotiate for food with a black marketeer.

In fact, these members of the global elite are within the secure zone of the World Economic Forum, safe from the dangers of despots and armed militia. But for an hour they enter the world of other people. They are experiencing the Refugee Simulator, an initiative of the Hong Kong–based Crossroads Foundation. The Simulator is designed to take participants beyond the statistics and data to confront the life of a refugee. It’s a giant theatre set where participants are exposed to the terrifying reality of the world’s displaced – forced to live on their wits, trading possessions for water and food, undergoing interrogations and rushed through minefields in the dark.

It’s easy to be cynical about this contrivance – Davos is ritually ridiculed as the place where the ‘one percent’ go to discuss the challenges faced by rest of humankind over champagne and canapes. And after the simulation these manicured hands will return to the main event to hear Bono opine about his latest cause. Emerging from the Refugee Simulator one CEO commented that 'reading a thousand books would not have taught me what I learned in the past hour'.

But I wager that people who have been through this Simulator have a better understanding of the lives and experience of refugees than those who have not. It will endure in the minds and bodies of participants longer than a dry policy briefing or even a harrowing news report.

Look beyond Davos and you find that organisations are increasingly putting visceral experience at the heart of how people learn. Facebook engineers have 2G Tuesdays when they recreate the slow and unstable networks of their users in emerging markets. Architects from Texas-based D2 go on sleepovers to care homes to experience for themselves the challenges of aging. Designer Thomas Thwaites created intricate prosthetic to enable himself to become a goat and went to hang out with a herd in the Alps. Technologists ‘bodystorm’ to act out new scenarios and technology use cases. Participants of Stripe Partners' Studios gain embodied understanding of consumer lives through immersion in their worlds.

A Body of Knowledge

Recent work in cognitive science provides further evidence of the intimate connections between how we think, our body and our surroundings. This research shows that the mind/body dualism overlooks how our body actually shapes our mind. For example, the act of smiling creates happiness. People who have had surgeries that physically prevent them from frowning become happier, and people instructed to frown in stressful situations experienced more discomfort than those who were instructed to maintain a relaxed expression. Our body’s interactions with the environment shapes how we think, too. Creativity and free thinking are encouraged by certain types of environments. As Sian Beilock puts its “When your body can move outside the box, your thinking tends to follow.”

Your body helps you learn, understand and make sense of the world, so why exclude it and rely just on the mind?

The creators of the Refugee Simulator want to scare participants, and the experience is reportedly harrowing. When confronted by (actor) soldiers, powerful business leaders often look to the floor. They aren’t told to do so; the behaviour is instinctive. Participants have experienced and learned something about what refugees have to live with—and even if it’s a small something between champagne and canapes, it’s an understanding they can’t achieve in non-visceral ways.

Better than a simulator is getting out into new environments for real. This is hardly a radical idea in itself, but as we increasingly hide behind slides – and our clients and stakeholders hide behind big data dashboards – I sense a need to remake the case for getting physical. We can take some inspiration from none other than George Orwell.

Orwell was the product of a privileged English public school education. In the late 1920s, after some formative years with the Colonial Police Service, he wanted to understand the underclass and poverty (and become a writer). So he spent time living in a poor neighbourhood of Paris and ‘tramping’ in London. In Down and Out in Paris and London he recounted how he “lived rough, exactly as the tramps did” (punctuated by interludes at ‘basecamps’ – the homes of friends in Chelsea and Hampstead where he stashed clean clothes and escaped to write up his experiences).

Orwell learned what hunger felt like; he vividly wrote, it “reduces one to an utterly spineless, brainless condition more like the after-effects of influenza than anything else.” He recounted how the simple act of going into a second hand shop in south London "put me instantly into a new world.” His worn, filthy clothes gave him a new identity at odds with his rather posh accent. His time in Paris and London taught him directly, not theoretically, about poverty.

In our somewhat dystopian age Orwell’s 1984 is back in fashion and he is lauded for his visionary powers. But perhaps it is his commitment to immerse in, and embody, other people’s worlds that we need to celebrate. Orwell could have relied on others’ accounts of poverty but he ventured from the safety of Bloomsbury, home of the London literary elite, into alien worlds. He wanted not to theorise these worlds but experience them. He wanted not just to know about hunger but to understand it.

Such full-bodied engagement might seem impractical, particularly in the context of product cycles and quarterly profit statements. But if we’re to create real understanding – a body of knowledge that cuts through for our clients and stakeholders – we need to think about the environmental and the experiential, not just the theoretical and the cerebral.

Stripe Partners is an EPIC2017 Sponsor.

Sian Beilock. 2015. How the Body Knows Its Mind: The Surprising Power of the Physical Environment to Influence How You Think and Feel

Dourish, P. 2001. Where the Action is: The Foundations of Embodied Interaction.

Photo: Soldiers check papers and take valuables at the checkpoint at A Day in the Life of a Refugee. © David McIntyre/Crossroads Foundation Ltd. via Flickr.

Simon Roberts is a partner at Stripe Partners, a global strategy and innovation studio based in London. He holds a PhD in anthropology and has formerly worked at Ideas Bazaar, Intel and ReD Associates. Simon was co-organizer of EPIC2012 and EPIC2013.

Going with the Gut: The Case for Combining Instinct and Data, Simon Roberts

Knowing That and Knowing How: Towards Embodied Strategy, Simon Roberts & Tom Hoy