This EPIC2018 panel addresses questions of fairness and justice in data-centric systems. While the many social problems caused by data-centric systems are well known, what options are available to us to make things better? Chair Elizabeth Churchill draws the panelists and audience into conversation about making change on many levels, in our daily work as well as larger-scale collaborations. 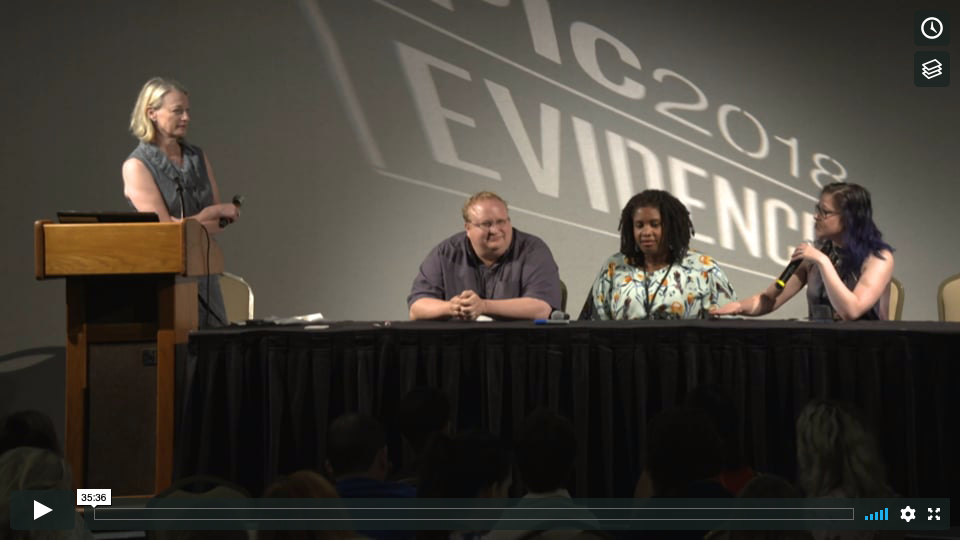 Elizabeth Churchill is a Director of User Experience at Google. She has built research groups and led research in a number of well-known companies, including as Director of Human Computer Interaction at eBay Research Labs, Principal Research Scientist and Research Manager at Yahoo!, and Senior Scientist at PARC and Fuji Xerox’s Research lab. Elizabeth has more than 50 patents granted or pending, 5 co-edited and 2 co-authored books (Foundations for Designing User Centered Systems and Designing with Data), and over 150 publications in theoretical and applied psychology, cognitive science, human-computer interaction, mobile and ubiquitous computing, computer mediated communication, and social media. She presented a paper at the first EPIC conference and has made many important contributions since. Elizabeth is also Secretary/Treasurer, Vice President Elect, and Distinguished Scientist and Distinguished Speaker of the ACM. She holds a BSc in experimental psychology, an MSc in knowledge-based systems from the University of Sussex, and a PhD in cognitive science from the University of Cambridge.

Miriam Lueck Avery is an anthropologist and foresight strategist. She sits in the Emerging Technologies R&D group at Mozilla, where she has been building a foresight capability sensing change, communicating vision, explore new opportunities to shape an internet that truly puts people first. She cut her teeth on futures at the Institute for the Future, where for the past decade she investigated how we may take care of ourselves and one another through health care, food, work, caregiving, and technology, as well as leading the Foresight Studio training initiative. She holds a degree in Anthropology from UC Berkeley.

Astrid Countee is the Community Manager for Data for Democracy, an inclusive community of data scientists doing social good, and an anthropologist at New Knowledge, the sister organization to Data for Democracy, defending the internet from disinformation. Previously, she worked as a Director for Tech for Justice, a software engineer at HP, and a data analyst in the energy industry. Astrid has focused her career on mixing and matching social science and technology to create products and experiences that resonate with others. A data-loving anthropologist, she has found a sweet spot with data science where technical skills, social identity and understanding, and domain knowledge combine. Astrid holds BA in psychology from Baylor University and an MA in applied anthropology from University of Houston. She is currently pursuing a master’s in computer science and math from University of Houston-Victoria.

Nathan Good is Principal of Good Research and a faculty member in UC Berkeley’s Master of Data Science Program. He specializes in user experience research, modeling and investigating behavior where design overlaps with data. He is a co-author of the UC Berkeley web privacy census and contributing author to books on privacy and the user experience of security systems. Prior to Good Research, Nathan was at PARC, Yahoo and HP research labs. At Berkeley, he worked with TRUST and the Samuelson Law & Technology Clinic and was a member of the 2007 California Secretary of State Top-to-Bottom Review of Electronic Voting Systems. Nathan has published extensively and holds patents on software technology for multimedia systems and event analysis. His research has been reported on in the Economist, New York Times, CNN, and ABC and he has testified on his research before the House, Senate, and FTC. Nathan holds a PhD in Information Science and a MS in Computer Science from UC Berkeley.