EPIC2016 Keynote Speaker John F. Sherry is the Raymond W. & Kenneth G. Herrick Professor of Marketing in the Mendoza College of Business and Professor of Anthropology at the University of Notre Dame. Join John at EPIC2016! 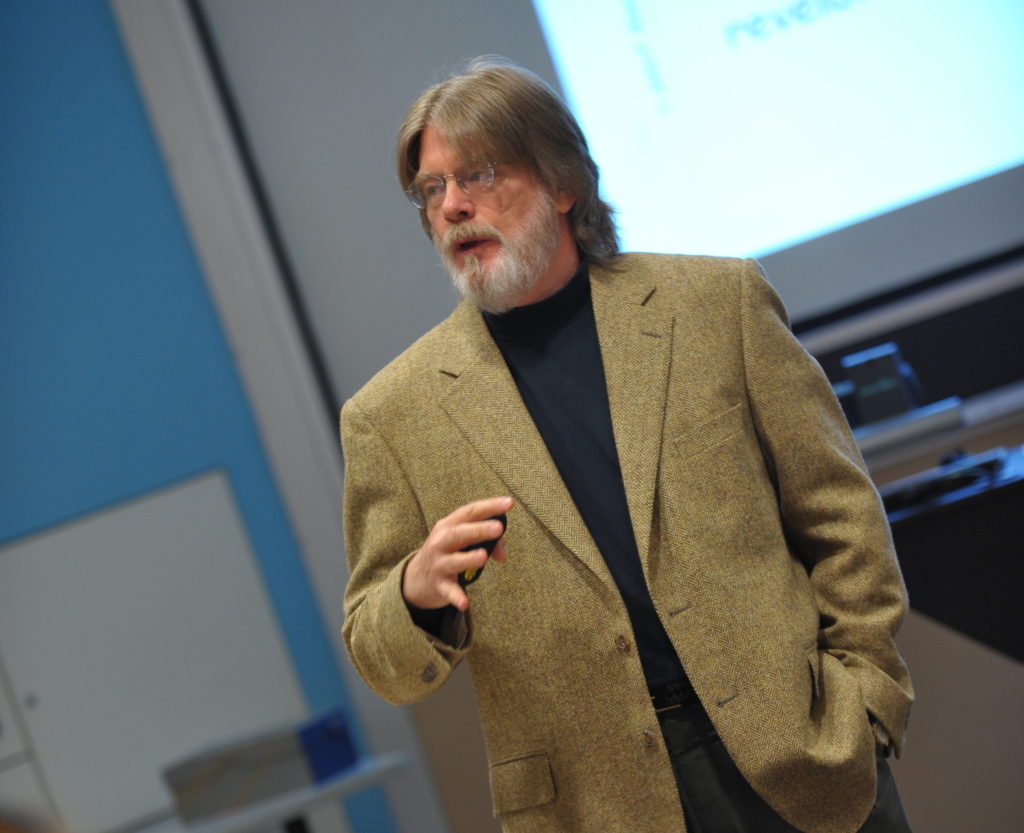 Sherry teaching an MBA ethnographic field methods course in which students produce a thick description of a consumption phenomenon and design managerial interventions based upon their analysis. Photo by Matt Cashore/University of Notre Dame

I caught up with Dr. John F. Sherry, joint professor in Marketing and Anthropology at the University of Notre Dame, in late spring, right after exams. John has had a prolific career in ethnography as a practitioner and theorist, with 10 books, over 100 articles, and numerous consulting engagements to his name. He is a collaborative scholar, and quick to point out others’ influence on his work—Sidney Levy, Joel Cohen, William Wilkie, H. Russell Bernard, Marvin Harris, and more.

In addition to his work on brand strategy and consumer behavior (among his many distinctions, John is past president of the Consumer Culture Theory Consortium), John has had “a long term investment in placeways—retail, atmospherics, that kind of thing,” which he says resonates with the work of more traditional anthropologists.

“It's like a hologram. You do this long enough, and it all starts to kind of blend together, intertwine." And at the center of it all is ethnography:

“Ethnography is basically fundamental to the way that I operate. It’s a source of data and insight for the research and teaching that I do; it's a source of inspiration for creative work that I do; and overtime it just becomes a way of life. You start out kind of focused on individual projects as a novice, and you move from one project to another, and the longer you're in the field, and the more your skills refine, you kind of shift from a project-based focus to more of a systematic one.”

“All my mentors without exception were just rabid interdisciplinary scholars; they all saw anthropology as having not only unique characteristics but this flexibility or openness. That's really been ingrained in me.”

Throughout his career in ethnography, John has blurred the lines between anthropology and other disciplines—starting with his years as an undergraduate at the University of Notre Dame:

“I doubled in English and anthropology as an undergraduate because I thought they were cognate disciplines—they were both ways of understanding human behavior and they both had pretty interesting ways of capturing and presenting that information. I was interested in anthropology almost as a bridge: I wanted to do creative writing, and I thought anthropology would be a really good way to amass enough interesting events to give you a background and inspiration as a creative writer.

John joined the PhD program in anthropology at the University of Illinois at Urbana-Champaign. He did traditional fieldwork in several places around the work, “but ended up doing a dissertation that was focused on alcoholism and substance abuse, and how the problem kind of manifested and was managed in an industrial kind of setting.” John imagined his work leading to a career at a medical school or management school. “Although it was traditional ethnography, they weren't conventional kinds of topics that anthropologists were studying at the time. ”

However, while he finished up his dissertation working at a hospital in central Illinois, an opportunity came along that caught his attention.

“Some folks at the University of Florida had decided, in conjunction with people in the anthropology department—Russ Bernard, Marvin Harris, folks like that—that an interesting way for marketing to evolve would be to complement the dominant paradigm at the time, which was psychology, with other kinds of social science. And so they reached out to anthropologists seeing if they could find somebody that had an interest in consumer behavior.”

Not having a background in marketing or consumption made John an unlikely fit, but it didn’t stop him from applying: “I applied to that job kind of construing what I was doing as 'consumer misbehavior'.”

It worked. He got the job and stayed at the University of Florida for two years, immersing himself in consumer research and learning a lot from psychologists in the field. Then he took a job at Northwestern University, where Sidney Levy—“if not the founding father, then one of the fundamental leaders of what became the consumer culture theory movement”—was chair of the marketing department.

Influenced by his colleagues at Northwestern, he gradually moved from consumer behavior to marketing.

“At the time I was there, Northwestern probably had more people from other disciplines than they did actual PhDs trained in marketing. The idea was that marketing and consumer behavior were an interesting kind of an intellectual playground, and people with fundamental disciplinary skills came together to look at marketing and consumption problems from the perspective of their discipline.”

John sees this interdisciplinary environment as an asset in his development as a scholar and practitioner:

“Because I was practicing in kind of a host discipline, where people were trained as modelers or experimentalists and were pretty unfamiliar and skeptical as far as ethnography was concerned, I had to do not only a lot of teaching and justifying and defending what I was doing, but I think my skills were honed more sharply as a result of having to justify it. I paid extra attention to being systematic when I was doing participant observation, or extra attention to the way that I would try to elicit lived experience from people in an interview in order in part to be able to demonstrate to colleagues who weren't trained in the area just how much mileage you could get out of methods that weren't quantitative or experimental."

As one of the trailblazers of consumer culture theory and anthropology in marketing, John has been something of a ‘pathmaker’ himself, although he prefers the metaphor of ‘bushwhacking.’

“You have independent entrepreneurs who are either academics or practitioners making a stab at a particular area and having some success, and it opens up to other possibilities that they and others can pursue. And up until recently I think it's been a pretty solitary or lonely kind of pursuit. You have a sense that the bushwhacking that you did gets covered up pretty quickly by the undergrowth again as you're off in some other direction.”

However, in recent years this ‘solitary pursuit’ has become much less solitary, due in large part to the realization of many practitioners that there are others out there doing this work whom they can learn from and emulate. “That's why groups like EPIC are so important I think, because they've got the force of a community behind them. It's been a great way to have people come together and network, and to share knowledge and talk shop.” 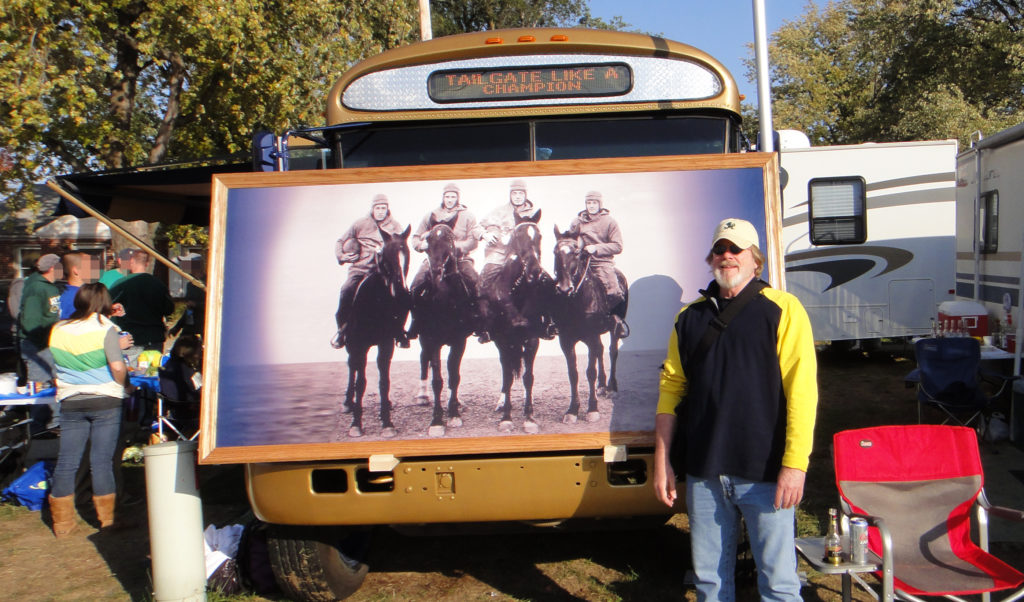 "A colleague and I are currently writing papers on a multi-year study of collegiate tailgating. This photo shows me standing before a tail gate encampment that is tricked out with themed artwork."

A lot of the progress that's been made is a result of collaboration between businesses and ethnographers. “You may never get better research access than those times that you work as a consultant. You get into places and you get faced with challenges and research questions and so forth that you couldn't mount on a typical academic budget.”

While this kind of collaboration has blossomed in recent years, John thinks some things are still missing. True to his background as an interdisciplinary bushwhacker, he wishes we would see more cross-disciplinary training in business schools and graduate schools. This is already a relatively common practice in marketing departments, which are often home to scholars with other backgrounds (just look at John’s history at the University of Florida, Northwestern, and Notre Dame for examples). From John’s perspective, giving graduate students the opportunity to develop complementary skills in anthropology and paths disciplines would improve the quality of work being done and expand the scope of ethnographic inquiry.

What the Future Holds

As ethnography starts to play a larger and more prominent role in the business community, John sees several challenges for the future of ethnography and the community of practitioners:

"The first is, linking ethnography with some body of theory—whether it comes from anthropology or sociology or clinical science or education. One of the challenges is to stress to all the different stakeholders that we address that it's not just ethnography that we bring to the table as business anthropologists, but it's a perspective of the world, it's an understanding of human behavior that's grounded in long traditions of theory.

“The other is ‘ambition management’—I guess that’s the best way I would describe it. Ethnography is a really labor-intensive practice, and as a result can be very expensive as a research technique. And so, practitioners have to really work overtime to keep their approach within the range of what's been called 'diagnostics research' [and] 'rapid appraisal'. In an era where businesses are really concerned about the costs of doing research, we really have to manage the ambition that our client might have to make sure that we are able to do the kind of thorough work that needs to be done in order to get a decent interpretation and a decent managerial intervention.

“I think there's one other challenge that goes along with this. Ethnography's been kind of a methodological darling for the past decade. It came almost from out of nowhere, then through the hard work of some pioneer practitioners and academics it came into vogue at firms. But now we're seeing the rise of analytics, big data, neuromarketing, netnography. So our ability to articulate our approach in light of these other kinds of emerging trends is going to be really important; we don't want to be bumped out of the methodological toolkit as firms start running their clients and consumers through MRI machines."

In light of these challenges, John thinks organizations like EPIC—as well as the American Anthropological Association, the Society for Applied Anthropology, and the National Association for the Practice of Anthropology—will have an important role to play:

“There really needs to be an institutional effort made to sanction and bless the study of whatever business behavior or whatever hybrid of scholarly and practitioner activity we're looking at, in a way that really encourages its future development.”

Paul Otto holds an MA in Social Sciences from the University of Chicago, and a BA in Anthropology from DePaul University. His interests include organizational & consumer cultures, design, and user experience (UX) research, and has he recently joined the product design team at Allstate. He hopes to make better experiences for everyone through people-centric research and decision-making.

Move Me: On Stories, Rituals, and Building Brand Communities, Kate Sieck (free article, please sign in or sign up)