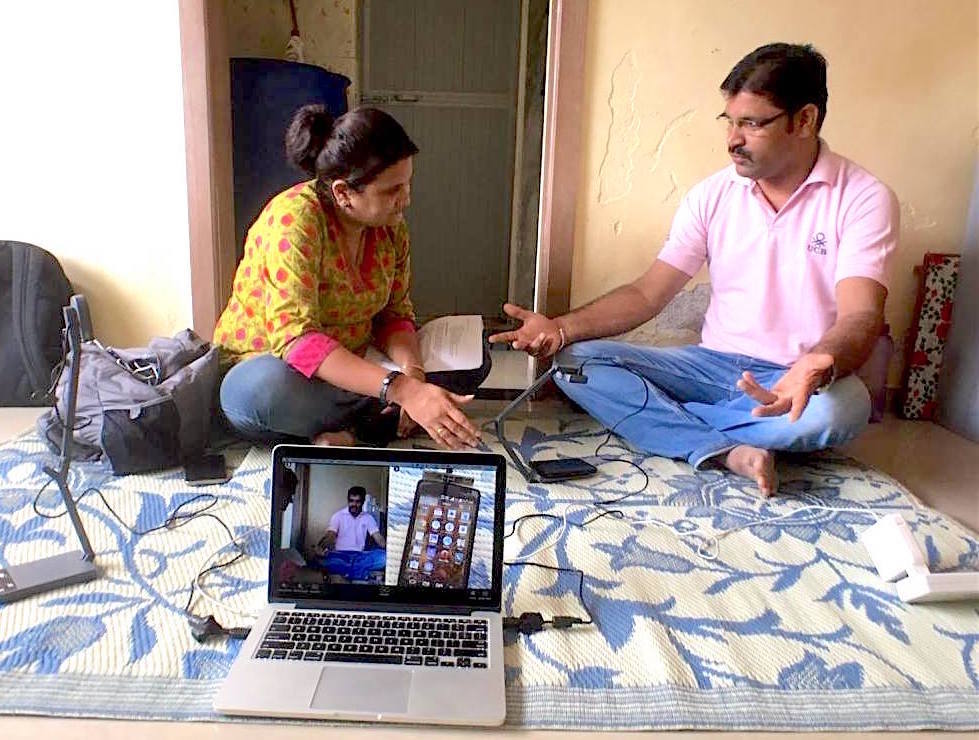 We find our clients constantly look for deeper meaning and nuanced user insights to help them innovate, stay ahead and rise to the challenges of business. At the same time, cross-functional teams within the organization want research to throw light on their focal paths. Add to this the ever-increasing role of technology and digitization in the lives of users, real-time play and social media engagement, and you have a heady mix that calls for new approaches and tools for ethnographic research.

“The relations between social life and its analysis are changing in the context of digitization… the means by which social life is performed and the devices through which it is recorded, observed and interpreted are increasingly the same or similar. Among many other things, this makes possible different ways of deploying social technologies in social and cultural research.” (Noortje Marres, What is Digital Sociology? CISP Online, 21 January 2013)

Over the last few years, we find mobile labs bringing greater value to our ethnographic research projects. The beauty of using mobile technologies lies in the flexibility they give us to do projects anywhere and at any time. Bringing a new dimension and immediacy, they can accommodate many different methodologies – ethnographies, in-home observations, usability sessions in labs, street intercepts and even in-group sessions. 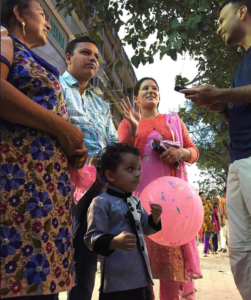 What Do Mobile Labs Bring to the Table?

We are not exaggerating when we say that our mobile labs have helped enrich our ethnographic nuancing across various stages of the project lifecycle—from fieldwork, through analysis to reporting.

The use of this easy-to-handle yet effective technology enables finer nuancing of our observations and understanding of behaviors. It brings these digital 'slices' alive in deeper and more meaningful ways.

For example, when a group of friends or family members crowd around a mobile phone and engage in social interaction, the use of technology allows us to observe in detail what participants see and do while at the same time not crowding them. This simulates their real world much better than if the researcher (and often you have more than one with clients accompanying us) was an active participant, looking over their shoulder! 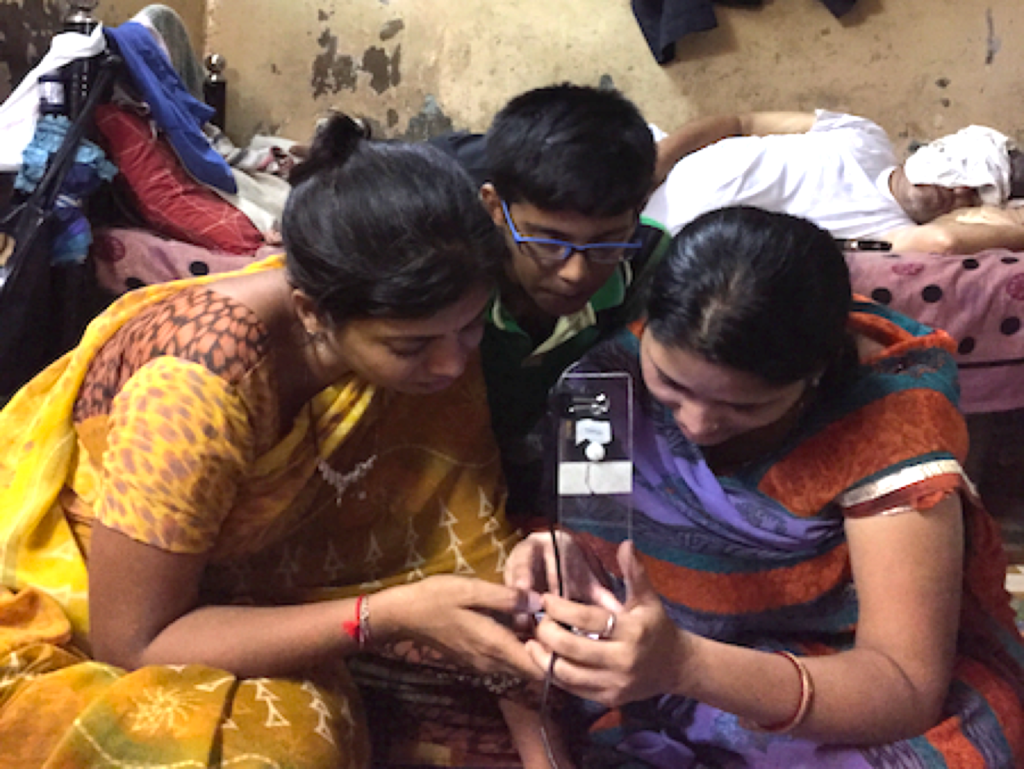 In this picture you see the respondents phone cradled in a Sledcam. The research team is watching giving them space while also viewing and capturing the exchange on a laptop (unseen). 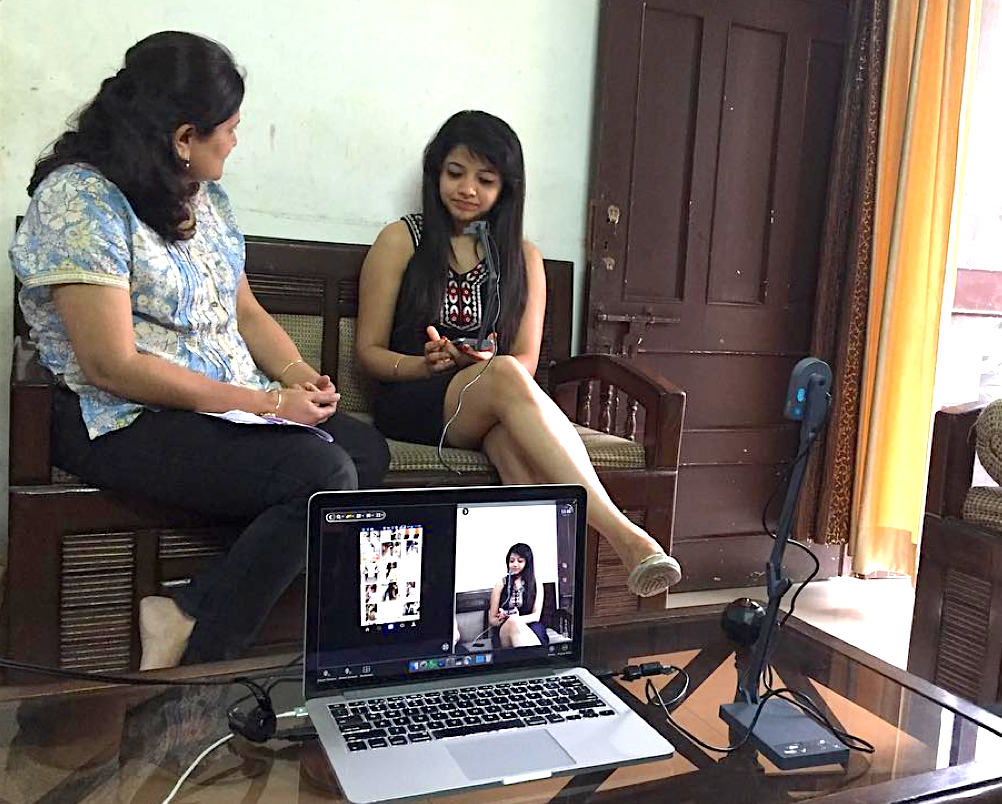 Of course, we also ask them to talk out their thoughts as they move from one stage to the next, and what prompts them to various behaviours and action but often, linkages and nuances emerge through uninterrupted observation of the various digital “slices” that emerge organically (and sometimes unconsciously for the participant) through this process.

Because these technologies are portable and setup easily, client-teams can remotely participate in the fieldwork and get real-time feedback. They are able to see exactly what the participant is seeing or doing, which often helps them take some immediate action.

Why is ethnographic nuancing so critical anyway? To answer this question, we are drawn back to the medical metaphor of “flawed prescription” offered by Mike McGovern in his 2011 Review Essay:

"Ethnographic nuance is neither a luxury nor the result of a kind of methodological altruism to be extended by the soft-hearted. It is, in purely positivist terms, the epistemological due diligence work required before one can talk meaningfully about other people’s intentions, motivations, or desires. The risk in foregoing it is not simply that one might miss some of the local color of individual ‘cases.’ It is one of misrecognition. Analysis based on such misrecognition may mistake symptoms for causes, or two formally similar situations as being comparable despite their different etiologies. To extend the medical metaphor one step further, misdiagnosis is unfortunate, but a flawed prescription based on such a misrecognition can be deadly." ("Popular Development Economics—An Anthropologist among the Mandarins," Perspectives on Politics 2011: 9, pp 345-355)

As practitioners we know how critical it is not only to avoid this “misrecognition” through due diligence in analysing the digital slices captured during fieldwork, but also to bring alive our reporting, help our clients arrive at meaningful conclusions, and yet stay very true to our observations.

Our mobile lab technology captures nuance, texture and depth and at the same time it allows easy slicing of findings, without losing the essence of the whole. This works wonderfully to address divergent needs of cross-functional client teams as they get to focus and work with relevant “slices”.

For example, in an UX study, designers want a slice of understanding UX issues and architecture, the content team wishes to understand language and engagement, engineers want to see bugs and opportunities to fix the tech, marketers look for entry points and packaging. Our version of the mobile lab makes all of this possible in an agile, incisive manner.

But Hey, Isn’t Your Technology Intimidating for Participants to Use?

This is a question we hear from some of our new clients when we first broach the idea of using mobile labs. They are initially cautious—until we take them into the field.

Interest in capturing what happens on a mobile exploded with the first iPhone 10 years ago. Sledcams are typically a small videocam attached to a Plexiglas frame which cradles the phone in a user’s hand. This has the benefits of moving with the user and presenting a stable picture of what they are doing on the device. This includes “touch” and what the fingers are doing.

Sledcams help to overcome encroaching in a respondents personal space and should be introduced so it is easy for the participants to continue as naturally as possible. They are usually connected to a computer screen, which provides a simple view that can easily be extended to other monitors during live recording.

A single sled is fine but later only tells the story of what a person touched while failing to capture her expressions. We’ve found the most effective setup is a portable dual cam methodology. With one cam focused more broadly on the user and the other to capture action on the device. To be effective your Sledcam design must be very light weight, easily held and not get in the users way. There are many examples on the web. It may also have to quickly adjust to different sized devices or quickly enable other content to be captured.

This is an example in a home in India where lighting is often low. The research team found it easy to watch at the same time. 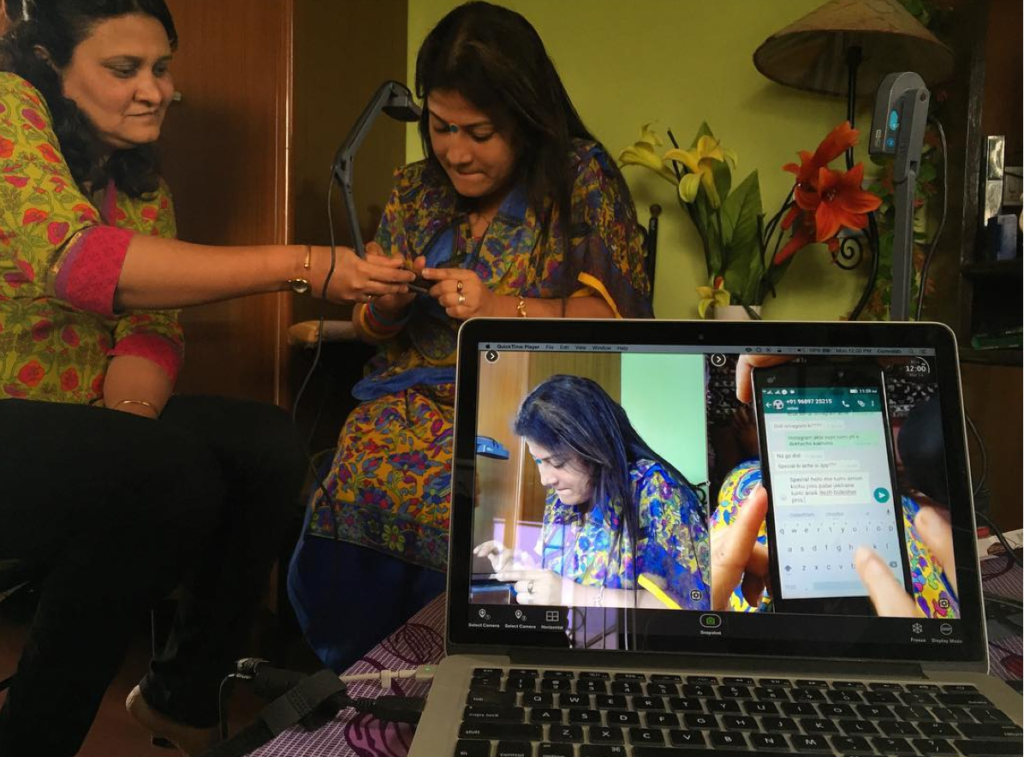 This is an example of a temporary viewing room set up for a large group to watch an interview. Often this requires the capture of local language and simultaneous translation. 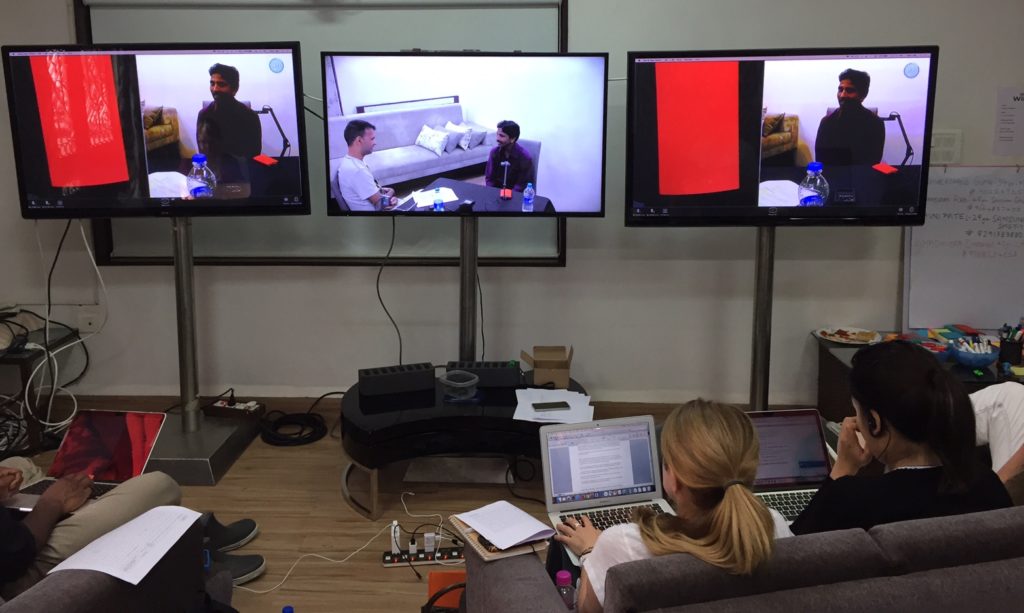 Here we are running a triad session and concurrently capturing / projecting the discussion and the individual phones. We’ve found that enabling the capture of tangible examples rather than just the discussion uncovers many other events, nuances, bugs that respondents won’t even know to talk about.

Aparna Ray has a Master’s Degree in Applied Psychology, and specializes in Qualitative Research and Ethnography. She’s passionate about people and cultures, and has spent 15 years travelling extensively across the Indian sub-continent and Middle East markets, handling a wide range of research across diverse categories, demographic and psychographic groups.  A keen observer of life and its idiosyncrasies, Aparna delights in expressing her views on news and stories as limericks, which she publishes on Newsmericks.  As a citizen media enthusiast, is a Director of Global Voices Online, an International citizen media aggregator, often focusing on ICT4D related stories from S. Asia.

Dina Dastur Mehta has a background in sociology and anthropology, and over twenty years specializing in qualitative research and ethnography. She is at the forefront of technology trend research in India and works with a global portfolio of companies; including learning journeys, and immersions for innovation teams. Dina brings her unique perspective to understanding the emerging social aspects of new technology and the impact of new media on youth and mobility. Her perspectives, blogging and participation in social media has earned her worldwide acclaim and a TED Fellowship.

Stuart Henshall brings 30+ years of experience in consumer products, communications, and technology to Convo. Stuart’s client side career as VP and GM includes developing products / brands in FMCG, Telecom, and Retail.  Formerly with GBN as a futurist and facilitator he’s been an active participant in the evolution of social media and developer communities (FaceBook, Twitter, iOS, IIW, etc.). Stuart brings to Convo the agile beliefs and approaches that organizations must accelerate learning to remain competitive. And in doing so, he has successfully moved our practice from mere research, to immersive learning and co-creation. He remains an evangelist for new ideas, and is an active participant and speaker at conferences.