In an interconnected, technology-driven world, does culture still matter? Can there really be “best practices” to be drawn from the vast range of human experiences? These are some of the questions driving Eric Weiner’s influential writing and thinking. 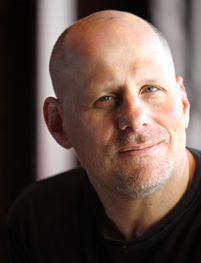 I spoke with Eric about his career trajectory and the inspiration he has drawn from the discipline of anthropology. His award-winning journalism and critically acclaimed books, The Geography of Bliss, Man Seeks God and The Geography of Genius all use cross-cultural and historical comparison as a strategy to make key concepts intriguing for the general public. After writing his first two books, explains Eric, “I realized that I’ve really been engaging in amateur cultural anthropology.... I believe that culture matters more than we think.”

Eric’s interest in culture, his deep appreciation for cultural differences and the everyday social practices that shape collective experiences, was sparked in early childhood. He says he’s always been a “place person” and describes how as a five year-old boy he ran away from home because he always thought “happiness was just around the corner”. This curiosity about the unfamiliar, which could be lurking just nearby, animated an illustrious career in journalism. In the 1990s Eric became NPR’s first foreign correspondent in New Delhi and was later stationed in Jerusalem, Middle East, Tokyo and East Asia. He has won several journalism awards including the Angel Award for coverage of Islamic affairs in Asia. But after years of covering war and unrest, he says, he felt burnt out. Across all the stories of human distress and misery, Eric saw a “sameness” that wore him down.

He was becoming more interested in the less newsworthy stories he encountered in these places—stories about happiness, resilience and creativity. These received less attention than conflict, but they presented Eric with an opportunity: to translate learnings for Western popular audiences. He accepted a year-long John S. Knight Fellowship at Stanford University to audit courses, attend seminars and generally to do a lot of reading and reflection. He jokingly refers to this time as a “Brain Spa”. After the fellowship, he embarked on his first book project: “I had this idea to travel around the world and look for the happiest places, what we can learn from them.“ The Geography of Bliss combines travel with science writing and seeks to showcase the happiest societies on earth. A subsequent book, The Geography of Genius, takes a similar approach to investigating places and cultures, from Ancient Greece to Silicon Valley, that have cultivated innovation and creativity.

In both books, Eric seeks to extract and distil the characteristics of societies that have successfully fostered “happiness” and “genius”. He mixes references to philosophy, history, psychology, economics, behavioral science, anthropology, and sociology with witty descriptions of his encounters with people and places “on the ground”. “They're fun books,” he describes: “they're not academic books; as l like to say, I read a lot of academic papers and journals so that my readers don't have to.” Eric talks the way he writes: he is funny but thought provoking, frank but also light. He uses humor to get a deeply and holistically researched topic close to his readers. 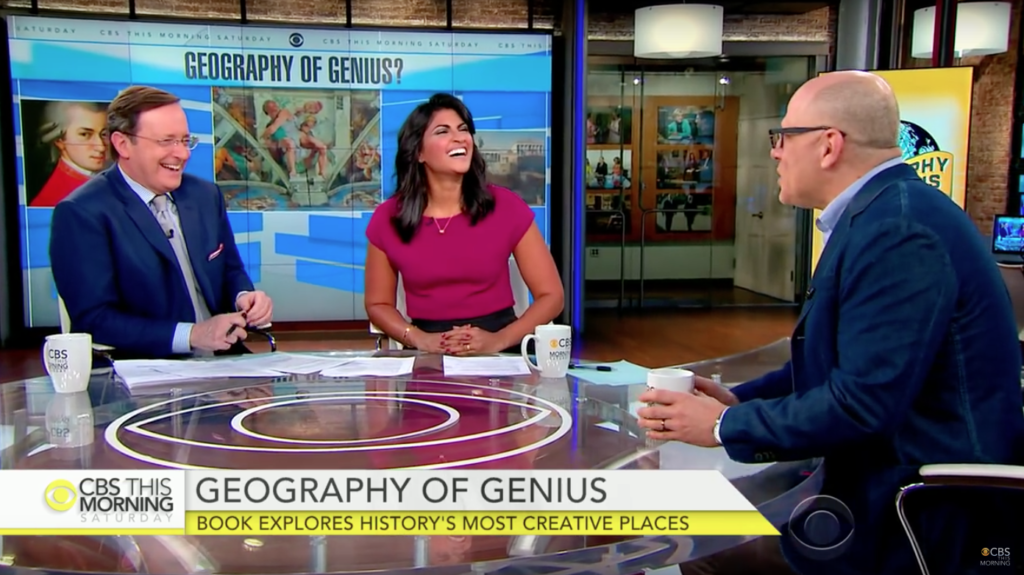 Eric Weiner brings the importance of culture and cultural differences to a broad audience through his public speaking and bestselling books.

Even as he makes complicated ideas accessible, Eric dispels the myth that there is a singular “recipe” for things like happiness or genius. He wants to show that “happiness” and “genius” are not just individual, genetically determined, interior states or dispositions, but are supported, even created, by complex social practices and cultural meanings deeply rooted in specific places. For Eric, culture matters deeply. The problem is that most people are too immersed in it to see how it matters: “I think one of the problems with culture is it's like the water in the fish tank and as long as the fish is always in the fish tank they're not aware that they're in this thing called water. It’s not until you step out of the fish tank that you realize, ‘Oh, I've been in water the whole time, now I'm in a different medium.’”

Silicon Valley is one of the “genius clusters” Eric writes about in The Geography of Genius to illustrate the importance of culture. If the promise of technology were true—if it really did level out cultural and economic distances and make location irrelevant—then places like Silicon Valley wouldn’t exist, technology would be made anywhere and everywhere. But this particular place continues to attract the people and resources that make it what it is. He explains, “It's a pretty steady percentage of innovation and venture capital that is funneled through Silicon Valley and you've got people from India and China who want to work there and not just remotely, virtually, they want to be there. The fact that Silicon Valley persists as a place in the culture tells me that culture is not dead.” Ethnographers know this, but we’re not so good at explaining it to the public. Eric’s writes about culture and its importance feels fresh, exciting, urgent and humorous. His method of taking a familiar concept, such as happiness or genius, and dissecting its cultural and historical construction to broaden our understanding of it is an effective method for communicating with non-anthropological audiences.

But Eric isn’t content to merely document cultural differences or universals, or emphasize that culture in general matters. He is deeply interested in finding lessons that his contemporary audiences can learn from. This step differentiates Eric from most contemporary academic anthropologists, few of whom would see it as their mission to extract “best practices” from the cultures they study. Ruminating about this point, we realize that this step differentiates him from most journalists as well: both anthropologists and journalists are supposed to chronicle the reality of each culture or event in its own right. But for Eric, if “everything is equally worthwhile and valuable, you cannot write the kind of books I write. I think you've got to make a leap at some point.” This desire to “make the leap” is something ethnographic practitioners or applied anthropologists can relate to.

Of course, Eric’s next leap is “just around the corner”: he’s working on a new book about “practical philosophy: it's how philosophy, from Socrates to Star Trek can be applied to real life, everyday problems…. Not your typical how-to or self-help book.” In addition to addressing some of the most pressing human questions—how to wonder, ask questions, enjoy, stay calm, see beauty—Eric plans to uncover the stories of ordinary people who “were sort of amateur philosophers who maybe lived their life according to stoic principles, for example.”

When I ask him how he finds inspiration for his projects, Eric explains, “I start thinking about something that I’m wrestling with. I was wrestling with happiness because I'm not a particularly happy person, thus [The Geography of Genius] is subtitled One Grump’s Search for the Happiest Places in the World. I've wrestled with spirituality and religion and dabbled in it and I've wrestled with creativity. I'd also look for subjects that have a cultural element that is under-appreciated.... I'm always looking for unexpected sources of practical wisdom.”

A prominent public speaker and lecturer, Eric is looking forward to meeting ethnographic practitioners at EPIC2016 and to hearing about the motivations and challenges we face. His innate fascination with ‘others’ extends to anthropologists themselves; he confesses, “I'd like to do a project among the anthropologists where I just am a participant observer among anthropologists for a year”.

Eric and I talked at some length about the overlap between characteristics of “genius” as he defines them and some of the traits of a good ethnographer: an outsider status, an unquenchable curiosity, an ability to withhold judgment, a proclivity toward exposing and questioning taken-for-granted assumptions, challenging the status quo and being divergent thinkers. Those of us with an academic background sometimes struggle with the challenge of providing simple, easily digestible messages to our non-academic colleagues. Our skepticism, in which academia trains us so well, can get in the way of creativity and invention, which is often required in the business world. Eric’s biggest advice for these anthropologists is: “Don’t be so humble”.

What better a person to speak to EPIC’s theme of Pathmaking than Eric Weiner, the ultimate “place” person? As Eric reminds us, cultures themselves work like paths, providing invisible maps that we follow, often unaware of their existence. We can alter these paths in small and larger ways, but we rarely create entirely new ones out of nothing. This is also how he characterizes genius and creativity: seemingly breakthrough innovations are always built on the traditions, cultures and systems of knowledge that come before them. Ethnographers, it seems, are in an ideal place to observe this process—and to contribute to it as well.

“The Secret of Immigrant Genius,” The Wall Street Journal, 15 January 2016

“Renaissance Florence Was a Better Model for Innovation than Silicon Valley Is”, Harvard Business Review, 25 January 2016

Meet all the EPIC2016 Keynote Speakers

“Ethnography is Fundamental”: John F Sherry, Jr / A Profile
John F. Sherry is the Raymond W. & Kenneth G. Herrick Professor of Marketing in the Mendoza College of Business and Professor of Anthropology at the University of Notre Dame.

Ethnographer on Wall Street: Karen Ho / A Profile
Karen Ho is Associate Professor of Anthropology at the University of Minnesota, Twin Cities, and author of the widely acclaimed book Liquidated: An Ethnography of Wall Street based on three years of fieldwork among investment bankers and major financial institutions.

What Anthropology Brings to Innovation: John Sherry / A Profile
John W. Sherry is Director of the Experience Innovation Lab at Intel Corporation

Dr. Tamara Hale is a design and digital anthropologist currently working at EffectiveUI, a digital product company based in Denver, Colorado. She has over a decade of experience in empowering leading technology companies to build exceptional products, services and user experiences through helping them gain deep understanding of their target audiences. She earned her PhD from the London School of Economics and Political Science and has worked as a research leader and educator in the field of Design and User Experience Research, Service Design and Social Innovation in Europe, the United States and Latin America.