by RACHEL C. FLEMING, University of Colorado at Boulder 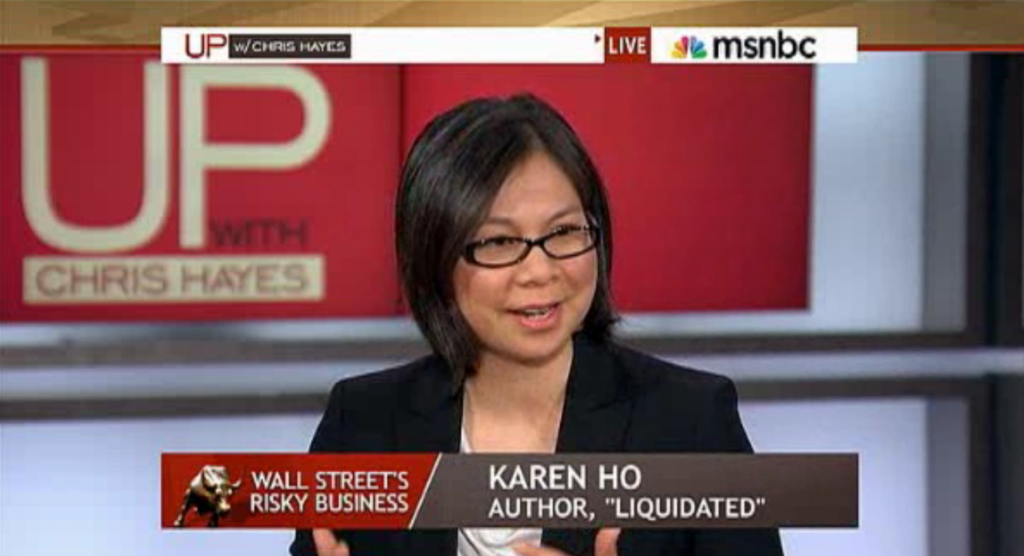 What do sentiments and ideologies have to do with Wall Street? Karen Ho would argue they are key for understanding and changing Wall Street’s institutional culture that generates and justifies a focus on the short-term. From working in a firm to interviewing workers and studying corporate publications, Karen’s insights into how particular mindsets come to dominate corporations or whole industries—in this case, the culture of liquidity—can help us transition from a culture of shortsightedness to one of creating long-term value.

Karen did not originally aspire to become an anthropologist, but her upbringing shaped her anthropological outlook in ways she realized only after she became one. Her father was a first-generation Taiwanese American doctor and the only OB-GYN in a fifty-mile radius in Covington, Tennessee. Growing up in the South as an Asian American child who didn’t belong clearly in any one group taught her how to think about race, uneven hierarchies, and constructed categories: “These trajectories and ways of thinking about the world really stuck with me.”

Karen started college at Stanford as a premed student, but then, “I fell in love with Feminist Studies. It cultivated questioning the world around us and the social categories we’re embedded in.” Many of the affiliated faculty members in the department were doing foundational work in gender and feminist anthropology, including Jane Collier, Sylvia Yanigasako, and Paulla Ebron. In putting feminist thinking and anthropology together, Karen found she could question ideas about the self and other and study how power was embedded in the everyday. Before committing to anthropology, she earned a Masters in Education at Stanford with an ethnographic project on the politics of multiculturalism in Stanford sororities. She then applied to graduate programs in anthropology, having found that “ethnography and anthropology became a central way to think through these critical and epistemological and theoretical tools that I’d been cultivating.”

When she entered the PhD program in anthropology at Princeton, Karen knew she wanted to study institutions that have “undue influence” on our lives. One day she read a front-page New York Times article on AT&T’s massive corporate restructuring and subsequent dislocation of approximately 100,000 workers. In another article in the same issue, this time in the Business section, the tone was starkly different, reporting that AT&T’s stock had soared. Later, an article about downsizing at Unilever laid bare for her the new sentiments and worldviews at work: the “announcement [of downsizing] cheered investors.” She found this juxtaposition both disturbing and profound: “These two processes are obviously related, but they seem to really reflect different sentiments, diagnoses, and approaches to the world. ‘Cheering’ seemed, to me, a very jarring term. Thousands of folks are dislocated: why would anyone cheer? It dawned on me that a different structure of feeling, a different a way of understanding social economy was happening here, and it was emergent.”

For Karen, anthropology is critical to understanding institutions of power. Instead of assessing Wall Street from the outside, she wanted to understand the worldviews and values undergirding the ethos of rampant downsizing, which she understood to be detrimental to employees and corporations, but which Wall Street viewed as positive for society. She rejected the common assumption that the problem is limited to a few “bad apples,” arguing, “It’s easy to say ‘good people, bad people.’ But when you do that, you actually miss the chance to investigate and unpack the larger social economic situation, institutions, people, and worldviews that helped to institute that. I wanted to use the tools of anthropology to understand corridors of power, to show their contingency, to show the ethos embedded and cultivated within them. By not doing so, we fall into the trap of naturalizing market cycles and naturalizing power.” Without this native understanding, we miss opportunities for change.

At first, Karen didn’t officially go to Wall Street as an ethnographer; she worked as an analyst in the Wall Street firm Bankers Trust. Initially she knew very few people who worked in financial services, but she discovered that Princeton was a major recruiting pipeline for Wall Street: “I realized I didn’t have to access Wall Street. It was already accessing me.” She joined the recruitment process, mainly with undergraduates, and landed a job as an internal management consultant with Bankers Trust, which is now part of Deutsche Bank—evidence of the endless mergers that characterize the banking sector.

This work “turned out to be crucial.” Karen explains, “Part of what you learn as an anthropologist is that there is no one way, no singular or right way to conduct ethnography.” Alluding to Laura Nader’s work on “studying up” and Hugh Gusterson’s concept of “polymorphous engagement,” she believes fieldwork includes many different ways of understanding and engaging with people, from backyard barbecues to social clubs, contacting reporters, or just building social contacts in the world you are studying.

At Banker’s Trust, Karen worked in “the middle office.” On Wall Street, the more prestigious investment bankers work in the front office, and those performing more mundane operations—accordingly less valued—labor in the back office. From the middle office, Karen could move easily between the front and back offices, a clear advantage. She was not conducting formal fieldwork: her employers and coworkers knew she would return to graduate school, and in fact she took a leave of absence from graduate school. She found this freeing: “It really allowed me to relax and learn and have everyday conversations. I did not do fieldwork, but I did journal and reflect on my own experiences.” She says it was “good for my sanity” to draw a clear line between graduate study and this experience, which she considers pre-fieldwork language study.

Karen went to Wall Street to understand the mentality of downsizing, and after six months on the job, she got it. She was downsized herself. “It wasn’t until after my whole group ‘got dismantled’ that I gleaned insight into Wall Street’s ‘culture of liquidity.’ This experience turned out to be a major ethnographic insight.” She had presumed that Wall Street financial institutions were only restructuring “brick and mortar” institutions, but at this point she realized Wall Street was also constantly downsizing itself. “The job insecurity and precarity, as manifested in the revolving door of Wall Street, was endemic to how they understood the workplace. That was pivotal to the study. It was actually realizing that downsizers are constantly downsized.” 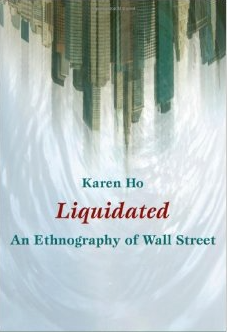 While bankers were framing themselves as the “best and brightest” to give advice to corporations, they also operated under the mentality of “‘I’ll be gone, You’ll be gone,’ or YBGIBG,” and so they are incentivized to focus on the quantity of deals rather than quality. Wall Street advice is focused on short-term stock prices and not on the long-term productivity or sustainability of institutions. Both advocates and critics of capitalism should take heed. As Karen argues in her first book, Liquidated: An Ethnography of Wall Street, these practices are not good for capitalism, but, rather, for creating crises.

Today, Karen is writing what she calls an “alternative cultural history of financial risk.” She critiques the assumption that finance workers are widely thought of as “risk takers par excellence,” even though their practices helped construct the great recession of 2008. The dominant version of the story is that the financial sector took on the burden of risk and that this was crucial for the economic recovery. However, Karen argues that, in fact, financial institutions relied on subsidies and “outsourced risk,” which has limited innovation and long-term stability. She is conducting interviews with many different actors, enacting what she says is her own version of “polymorphous research.”

Karen Ho feels that anthropology and applied work have much to offer each other, and in her own work she continually asks, “What insights may this study afford? …What anthropology can offer to institutions is a way to unpack the vertical slice of sites, institutions, cultural forms, particular practices, and values. How do they make structure and how do they change over time? I think that ‘vertical slice’ is important because we are either at the level of the individual or at the level of global macro changes. Industry often uses these mindsets, and either way you miss the entire middle.”

For Karen, work on contemporary business culture by Carrie Lane is an example of rich workplace ethnography that tackles structural changes and institutional culture. In her own work, Karen has used anthropology to understand how the corporation has changed in the past century. She feels that many businesses still see corporations in a “post-World-War-II” way, as long-term social institutions. By contrast, she argues, “What they don’t realize is that in day-to-day practice, the corporation is governed by short-term stock prices.” She argues that from the outside, it is hard to understand why corporations are no longer concerned with jobs and workers, instead focusing on investors and shareholder value. She argues that many people are “blindsided because of their anachronistic view of the corporation,” because the way people “resist, navigate, and are raised to think about [corporations] are not necessarily along short-term shareholder value lines.”

This shift also sheds light on workplace culture, helping to explain what happened to careers and the notion of a corporate ladder, which have largely been replaced by the gig economy, temp work, free agency, and contract engagements. She asks, “How does this reflect financialization? How to intervene in a workplace where employment and jobs are not part of how corporations envision themselves?” Karen argues that although there is nothing in corporate contract law that says the corporation must put shareholders first—noting Lynn Stout’s work on the myth of shareholder value—in practice, employees and employee benefits no longer have a stable and protected place at the table. This is damaging not only for workers, but for the economy overall.

Anthropology, Karen feels, has a role to play in showing that corporations can translate better treatment of employees and communities into long-term shareholder value, and that these factors actually combine in creating a robust economy.

Rachel C. Fleming received her Ph.D. in Anthropology from the University of Colorado at Boulder in May 2016, with a dissertation on the impact of new jobs in information technology for women from different generations in Bangalore, India. Her research and teaching interests are in gender, work, technology, kinship, and the anthropology of time, in South Asia and the US. Her next project will focus on gender and the idea of productivity for transnational teams working in technology.