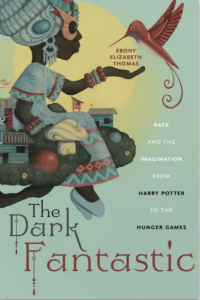 As we anticipate EPIC2021—yes, bring on the puns—I had the spectacular task of studying The Dark Fantastic: Race and the Imagination from Harry Potter to the Hunger Games by Ebony Elizabeth Thomas. My goal was to find small ways to spark our EPIC community's curiosity ahead of her EPIC keynote. As a regular audiobook listener, I listened to the voice of Janina Edwards bring Ebony Thomas’ work from the page to my ears, and if you are looking to add an audiobook to your virtual shelf, it’s a fantastic audiobook; you should not hesitate. I also have the paper book and it is a wonder to hold.

Because Ebony weaves in autoethnographic storytelling throughout her book, my personal experiences were what first drew me to this work. We both grew up in Michigan. Ebony was in Detroit and I was a white girl in one of the many suburbs spawned by White Flight. We are Generation X with “the holy trinity of our mid-1980s children’s films [being] The Neverending Story, The Dark Crystal, and—my favorite [too]—Labyrinth” (p. 66). Like Ebony, I am also an educator and I often read/listen to speculative fiction with my students including Parable of the Sower by Octavia E. Butler and The Handmaid's Tale by Margaret Atwood. So I anticipated this would be a valuable and intersectional book both personally and professionally.

Ebony and I chatted by phone in August after she recently moved back to Detroit to start a faculty position at the University of Michigan. It was a lovely conversation to hear about how her Dark Fantastic Cycle has taken on a life of its own, and the work has connected with people outside of education and literature, and with communities like EPIC.

Two things that I will bring to the surface before her keynote are the conception of Dark Others and how the Dark Fantastic Cycle that Ebony sees in stories provides a structure for continued white dominance “in text after text” (p. 26). In Ebony’s work, the Dark Other of the dark fantastic is anchored in a fantastic tradition where:

“the Dark Other is the spectacle, the monstrous Thing that is the root cause of hesitation, ambivalence, and the uncanny. The Dark Other is the present-absence that lingers at the edges of every fairy tale. She stalks the shadows of the futurist visions of science fiction, lurks along the margins of the imagined magical past of high fantasy, and renders the uchronia or alternate history into a nonsensical cipher. What is most chilling is that even when those who are endarkened and Othered dream in the fantastic, the Dark Other is still the obstacle to be overcome. And most chilling of all, even in stories where all of the characters are “White and blue-eyed” […] the Dark Other is always already there.

When readers who are White, middle class, cisgender, heterosexual, and able-bodied enter the fantastic dream, they are empowered and afforded a sense of transcendence that can be elusive within the real world. If this is the case, then readers and hearers of fantastic tales who have been endarkened and Othered by the dominant culture can never be plausible conquering heroes nor prizes to be won in the fantastic. Unless the tale is meant to be comedic, tongue-in-cheek, a wink and a nod that breaks the fourth wall and assures audiences that this is a parody of the fantastic, not the real story…

…the implicit message that readers, hearers, and viewers of color receive as they read these texts is that we are the villains. We are the horde. We are the enemies.

With this conception of Dark Others, Ebony’s Dark Fantastic Cycle provides a way to chart the experience of Dark Others in fantastic stories through a cycle of: (1) spectacle, (2) hesitation, (3) violence, (4) haunting, and (5) emancipation. Ebony’s work takes us on a journey through well-known pop stories—including the Hunger Games trilogy, BBC’s Merlin, and The Vampire Diaries—where we can see these patterns at play. The book concludes with an examination of Hermione from Harry Potter and Ebony’s autoethnographic experiences in online fandom communities and later as an academic looking back in time.

The Dark Fantastic Cycle invites us to see how the patterns of the cycle unfold in our day to day work and she provides a framework—spectacle, hesitation, violence, haunting, and emancipation—for understanding experience. Because EPIC is united in bringing a “deep understanding of culture and people and their everyday lives,” the Dark Fantastic Cycle is an imaginative way to critically reflect on how race matters and impacts y/our work. If we do not recognize the Dark Others and how the Dark Fantastic Cycle impacts people and communities, we may miss the negative impacts within the organizations we work within, and our outward facing work with citizens, clients, communities, consumers, and students. If you are wondering, “isn’t this a stretch” to think that literary criticism and mainstream children's fantastic stories help adults in their personal and professional lives, I think it is a stretch: it’s our imagination reaching out since “books travel where we do not,” as Ebony tells her students.

Another way Ebony’s work is of value to EPIC is The Dark Fantastic is about Ebony’s experience first as a reader and fanfiction writer, and then as a person who transitioned to becoming a scholar looking back in at fandom culture. Ebony braids together her experiences of insider-outsider and outsider-insider through The Dark Fantastic, which culminated in the last chapter where “Hermione is Black.”

I am an active reader/listener of speculative fiction and fantasy, but when I read about 2.5 worth of the Harry Potter series—I became disinterested with the Quidditch games that might have started out book 3—my white frame of reference assumed Hermione was also cis white girl despite the subtle ways the text suggests otherwise. I experience the “imagination gap” (p. 1) that Ebony writes of when I read, educate and live. I deeply appreciate how Ebony’s work allows me to recognize my biases, which I can then actively counter. Although it is a never-ending task to address generations of cultural assumptions and structural racism, each story-book-author invites me to imagine and move in those better directions. And then I can participate with more awareness in “restorying the imagination itself” that Ebony asks of us (p. 163).

Hope to catch you at EPIC2021 and at Ebony’s keynote!

Thank you Ebony for your time while chatting by phone!

Veronica Kim Hotton (veronicahotton.com) is an Instructor at Portland State University in the interdisciplinary general education program University Studies. She completed her PhD in Education at Simon Fraser University (Canada) and an MA in Geography at the University of Hawai‘i at Mānoa. At Central Michigan University, she completed a BS in Environmental Studies and Music, and a BM in Orchestral Instruments. She writes poems and adopts—or gets adopted by—cats. 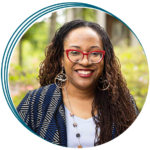 Ebony Elizabeth Thomas is Associate Professor in Educational Studies at the University of Michigan. She studies how people of color are portrayed, or not portrayed, in children’s and young adult literature, and how those portrayals shape our culture. As children’s and young adult literary empires continue to dominate publishing and Hollywood, she strongly believes that the field has the potential to become one of the most effective postcolonial, critical, and activist projects of all. A former Detroit Public Schools teacher and National Academy of Education/Spencer Foundation Postdoctoral Fellow, Thomas was a member of the NCTE Cultivating New Voices Among Scholars of Color’s 2008–2010 cohort, served on the NCTE Conference on English Education’s Executive Committee from 2013 until 2017, and is the immediate past chair of the NCTE Standing Committee on Research. She is co-editor of Research in the Teaching of English, and her most recent book is The Dark Fantastic: Race and the Imagination from Harry Potter to the Hunger Games (NYU Press, 2019). Her expertise on race and representation in children’s and young adult literature has been sought after nationally and internationally. She has been interviewed by MSNBC, the BBC, the New York Times, the Philadelphia Inquirer, and the Chicago Tribune, to name a few. She is a former reviewer for Kirkus’ children’s book section, and has written book reviews for the Los Angeles Times. She is a past National Book Award for Young People’s Literature judge, and is a current member of the United States Board on Books for Young People.

Ethnography for Sensemaking in Times of Trauma, Sharon Bautista