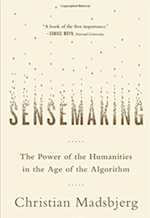 Sensemaking: The Power of Humanities in the Age of the Algorithm
Christian Madsbjerg
2017, 240 pp, Hachette Books
Excerpt

Christian Madsbjerg has done a huge amount to elevate the profile and impact of ethnography in corporate settings. As co-founder of ReD Associates, Madsbjerg makes a consistent and compelling case for ethnographers to set their sights beyond user experience and design to impact decisions at the pinnacle of global organisations.

His new book Sensemaking advances his mission further, advocating humanities-based thinking to a much wider business audience. The central analysis feels more even resonant today than when the book was released last year: the power of big data has created a false idol, lulling us into the belief that the algorithm has the capacity to replace critical thinking.

What unfolds is a story which is compelling and bold in critique, but strangely conservative and ambiguous in the solutions it prescribes.

Sensemaking is a polemic, and it is refreshing that Madsjberg pulls no punches. Silicon Valley is cast as the villain of the narrative, as the originator of the big-data cult which is growing across contemporary business culture.

But for ethnographers his criticism strikes even closer to home. Not only is West Coast dogma skewing executive decision-making, Madsbjerg argues that this tech cult it is bastardising the very foundations of critical thinking through the “bullshit tornado” otherwise known as Design Thinking. For Madsjberg, Design Thinking makes sense of people in the same way algorithms make sense of Big Data—superficially and according to pre-conceived rules. Rather than being truly ‘human-centred’ as it claims, Design Thinking is in fact the imposition of a San Fransisco-inflected Airspace ad infinitum: the tastes and ideas of a singular culture veiled as the product of a neutral process. Madsbjerg mocks:

“Being customer-centric is paramount for design thinkers like IDEO. Not that they have any real interest in leaving their studios in hip cities to go out and explore other worlds.”

Anyone who works with (or for) companies on the West Coast (as I’m sure the author does) knows these characterisations are exaggerated, and it’s a shame that Madsbjerg’s cartoon-like expositions sometimes drag legitimate points into straw man territory. But despite the hyperbole, his central observation that leaders of global corporations “are isolated in their worldview” repeatedly hits home.

Paraphrasing Heidegger, Madsjberg explains how leaders rely on the superficially ‘correct’ picture provided by thin market data rather than seeking the deeper human ‘truth’ that is the key to unlocking future opportunities.

So what can business leaders do to become better Sensemakers? Madsberg’s basic suggestion is that they aspire to be modern-day renaissance men and women: read literature, absorb social theory, and commission deep ethnographic research to fill in the gaps.

But is he inviting executives to leave one ivory tower only to usher them into another?

Former Ford CEO Mark Fields makes repeated appearances in the book. He represents the antidote to the Silicon Valley state-of-mind, demonstrating it is possible to steer a global organization with a holistic, humanities-driven approach.

Madsbjerg uses the example of the luxury car market to explain how Ford is “prioritizing an understanding of real people and their experiences” to develop a differentiated strategy which reframes luxury for the modern, globalized world. The implications of the strategy were far reaching. “Fields used the Sensemaking insights to drive the reorganization of jobs and processes.”

And how did the CEO acquire these decisive insights?

“Fields is using Sensemaking insights culled from a variety of studies to globalize the outlook of the entire company.”

Here Madsbjerg seems to be suggesting the products of Sensemaking can be divorced from the context in which they are generated. That is, researchers do the Sensemaking, and executives act. Insights emerge as Platonic forms that, shared with the right “courageous” leader, can be re-deployed to transform complex organisations from the ground up.

Interestingly, Field’s detached relationship to Sensemaking is at odds with the most compelling case studies Madsbjerg presents elsewhere in the book. He explains how George Soros used his personal ‘feel’ of the streets of London to predict Black Wednesday: “this is not universal knowledge; it is necessarily situational.” He lauds EU Commissioner Margrethe Vestager for her immersion in the world of European politics: “After two decades in politics, she can now see opportunities for possible reforms that others can’t see”. Harvard Negotiation Professor Sheila Heen’s emotional intelligence is credited to her deep connoisseurship of “human relationships and social moods” honed by countless hours of study and practice.

Madsbjerg’s own evidence suggests the emergence of ‘truth’ is a very personal, situated experience that can’t be effectively outsourced. Meaningful insight seems to require a full-bodied engagement with, and absorption into, a world. In short, what makes Soros, Vestager and Heen so good at their job is the fact they are the ones doing the Sensemaking.

By contrast, his prescription for Fields and other executives seems conservative and disengaged: commission Sensemaking insights and consider them alongside the bar charts on your data dashboard.

By framing Sensemaking this way there is a danger that decision making remains understood as just another management science to be optimised. The solution is to acquire richer data and read more, but in effect the executive day job remains managerial and unchanged.

To my mind this misses the most powerful aspect of the Sensemaking approach Madsbjerg is advocating: the existential one.

There is an obvious paradox at the heart of Sensemaking. Adopted fully, it is an approach few executives have time to pursue in their meeting-addled days.

Which is why they hire consultants to do it for them. And perhaps why Madsbjerg needs to frame cultural insights as a product that can be generated and distributed independent of the people who will use them day-to-day. But as I’m sure he agrees, insights never exist in isolation, and interpretation always involves ego, subjectivity, politics and background knowledge.

In a compelling passage Madsbjerg hints at why executives have become so distant from their markets:

“Over time, as management has become increasingly professionalised, you can sense a nihilism or loss of meaning in the executive layers...what happens when satisfaction comes from managing...and not producing something meaningful.”

So what should one do to start producing something meaningful? Here Madsbjerg doesn’t have much to add, other than imploring the reader to “give a damn.”

There may be inspiration from an unlikely place. In a recent interview the Psion of Silicon Valley himself, Elon Musk revealed that he spends 80% of his time at the coalface of Tesla and SpaceX as an engineer, leaving management to other executives.

Musk famously believes in the importance of dedicating himself to inspirational projects. But for him it’s not enough to care about what your company does in the abstract: to make better decisions you need to experience and contribute to the grassroots of the business yourself. Those who do start to genuinely care, and crucially, develop a more intuitive understanding of what needs to be done.

Sensemaking in corporate settings requires more than access to richer data. It means leaders must re-think and re-structure what they actually do day-to-day. It means reducing the managerial burden and reconnecting with the products they produce and the people that use them. Sensemaking means engaging first hand, eye-to-eye. It is only then the world of enlightened decision making, the world Madsjberg so eloquently advocates, will truly arise.

Tom Hoy is Co-Founder of Stripe Partners, a global insight and innovation consultancy that helps organizations develop 'Embodied Strategies' through their collaborative approach to ethnography. Over the last 10 years he has worked across a range of settings – from the NHS to Facebook – figuring out how to make an impact with research. Outside of Stripe Partners Tom developed the Made In Lambeth innovation network in London, bringing together multidisciplinary teams to support local causes. His love for the social sciences started at the London School of Economics.

Strategy as an Unfolding Network of Associations, Tom Hoy and Tom Rowley

The Virtues of the Visceral, Simon Roberts

3 comments for “Book Review: The Paradox of Sensemaking”