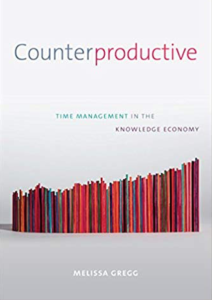 Most of us struggle with managing our time while feeling perpetually swamped with work. White-collar professionals, myself included, have often turned like supplicants to time management tools ranging from self-help books to productivity software to maximize efficiency in less time. Confession: I once purchased a paper pocket guide to improving time management when feeling anxious about workplace performance pressures before the start of a new job. Despite its familiar and well-worn exhortations – set goals, track your time, create to-do lists, manage emails, develop routines, delegate – I clung to the belief that this manual among the surfeit of how-to texts and apps out there would be the one to help boost my productivity. My preemptive attempt at mastering time to reach peak personal performance raises a key question about today’s productivity-obsessed work culture: What, really, is the larger goal of work when the search for time-saving measures in the pursuit of productivity is its given ethos and an end in itself?

In her latest book, Intel’s Melissa Gregg sheds light on why such social questions should be asked but, more often than not, are shunted aside. Counterproductive: Time Management in the Knowledge Economy is an ambitious, historically informed account of how such productivity and time management aids came to be embraced and promulgated by the professional-managerial class. From 20th century home economics to today’s smartphone apps, Gregg argues that productivity has come to occupy a central role in how white-collar work is evaluated and experienced. In so doing, the productivity imperative among salaried professionals encourages a solipsistic approach to work and job performance – one rooted in efficiency thinking and post-secular moral beliefs valorizing meaningless activity – that delegates lower-status forms of work to various Others and deters individual workers from engaging collectively in larger existential questions around defining work’s purpose and limits. For this reader, the greatest contribution of this richly researched book is the reflexive implications of her argument. As the social has progressively been evacuated from the self-motivational literature and productivity techniques she analyzes, social analysis among knowledge workers of the political economic contexts that structure their and others’ labor and the collective search for social solutions has concomitantly been erased.

The book is divided into three sections – theory, practice, and anthropotechnics – and bookended by a preface and postscript. The first chapter excavates early twentieth century investigations of workplace performance and the pivotal, yet relatively invisible, role that the domestic sciences played in promoting workplace timekeeping efficiency. While Frederick Winslow Taylor occupies a canonical place in organizational studies, Gregg rereads its founding history through a paradigm-shifting feminist lens by decentering Taylor in favor of women like Lillian Gilbreth and Ellen Richards, whose pioneering efforts to promote efficiency in the domestic sphere anticipated the rise of time-efficiency thinking in the workplace. Richards, for example, applied scientific principles of health, exercise, and hygiene to domestic tasks in her publications. MIT’s first female graduate, Richards’s stress on efficiency and self-sufficiency in home economics would eventually find wider resonance in popular time-management advice in the US. And while Gilbreth has long been associated with her husband Frank, Lillian was also the sole author of works that pioneered the use of cinematic recordings of workers, visually breaking down their labor into micro-tasks that in effect shifted the emphasis from group to individual achievement. Nevertheless, Lillian’s professional contribution to scientific management has been overshadowed by her more widely known husband. By recovering the role of these pioneering women, Gregg shows how the boundaries between the domestic sphere and the corporate organization blurred as ideas for productivity disseminated more widely.

Gregg continues to track these ideas in the following chapter by focusing on how productivity ideals became crystalized in a new genre peddled by self-help gurus beginning in the late 1950s: the popular self-help instruction book. Referring to the German cultural theorist Peter Sloterdijk’s concept of “athleticism,” she reads these texts “as codified practice, a form of training through which workers become capable of the ever more daring acts of solitude and ruthlessness necessary to produce career competence” (Gregg 2018, 54). Typical of this genre is Stephen Covey’s The 7 Habits of Highly Effective People, which, in ostensibly helping people to prioritize by encouraging them to categorize work that is important but not urgent, ends up further individualizing workers and deferring their longer-term life goals. Or take Getting Things Done, David Allen’s best-seller that claimed workers can take control of one’s time through disciplined training: “You can train yourself, almost like an athlete, to be faster, more responsive, more proactive, and more focused in knowledge work” (ibid., 67–68).

The chapter “The Aesthetics of Activity” brings Gregg’s analysis to our current historical moment of “frictionless” user experiences created by app designers and software developers to help workers manage their busy schedules in the pursuit of productivity (without purpose). These apps, which include a subset devoted to managing time, are designed to “get things done” quickly and efficiently with minimal effort through particular aesthetic styles that privilege easy synchronization across platforms, analytics data, and visual pleasure in creating order from the mess of life by seamlessly arranging “to do” lists. By aestheticizing these activities, Gregg suggests, “questions about the volume or character of work that requires action” are displaced (ibid., 86). Productivity continues to be unquestioned as a desirable lifestyle choice through intuitive mobile app solutions that skate over thoughtful deliberation. The challenge lies in the pleasure of convenience that many people enjoy from friction-free user experiences. What other forms of pleasure are available that are rooted in different values of living, such as communitarianism?

Coursing through her argument is a commitment to reflexivity, a refusal to separate the personal from the social that serves as an antidote to the deracinated, ego-centric self-help productivity and time management manuals and tools she critiques. Whether it is meditating on her own professional struggles in managing the vicissitudes of work and life, including an acknowledgement that her labor depends on taking labor and time away from others, or reflecting movingly on her mother’s “strategies of consolation and recovery” to deal with alienation in the professional workplace (ibid., 141), Gregg’s grounding of the personal in wider social networks of care is a model of engaged, reflexive scholarship.

In that vein, Counterproductive closes with some hopeful reflections on the future of labor performance in relation to ongoing productivity regimes. While she does not abandon her critical stance, the conclusions offer up possibilities for productive experimentations with community-building that envision solidarity and collective care outside conventional corporate performance metrics, even if temporary. “The forms of measurement and reward celebrated in the practice of productivity,” she observes, “are terms originally set by the enterprise” (ibid., 130). In contrast with muscular corporate athleticism and the self-involvement of career advancement cultivated among knowledge professionals, worker-driven initiatives such as coworking spaces and weekday morning dance parties provide a more humane paradigm of collegial “atmospheres.” Coworking spaces offer experiments in new forms of worker conviviality by momentarily connecting disparate workers – independent contractors, remote employees, freelancers -- in shared office spaces with an ethos of social connection and hospitality. Daybreaker is a morning dance party coupled with mindfulness activities that “is explicitly hedonistic in its aim to unsettle the norms of the working week” (ibid., 136).

Gregg’s turn to these alternative work arrangements that re-imagine and cultivate practices of social solidarity in white-collar office culture is an intriguing, important move, one that is consonant with the reflexive social analysis that is core to her book. While acknowledging their limitations, she takes seriously these interventions in the struggle over the future of work, for they push individuals to respond to accelerated productivity and temporal pressures collectively.

Nevertheless, such experiments must necessarily articulate with wider efforts that cut across white-and blue-collar as well as salaried employees and contingent workers in a range of industries to counter work-life imbalances. And this is where Gregg, as I see it, could have pushed her provocations in more radical directions by attending to a greater diversity of actors that are needed to stimulate public conversations and coordinated action around time, work, and leisure. The recent resurgence of tech worker activism, for example, in pushing back against rampant bias and abuse in the corporate workplace provides a hopeful model. Salaried and contract workers, employees performing knowledge or cleaning service and care work, labor organizers, and grassroots community members have productively coalesced to bring greater accountability and social justice for the common good. These awkward yet productive “frictions,” following Anna Tsing (2005), may provide grounds for opening up new forms of community action and politics.

Indeed, Gregg gestures in this direction in related but separate research on the coworking space, WeWork, that she conducted with Thomas Lodato. In their fieldwork, they highlight the key role of community managers at the startup company in mediating relationships among member colleagues from organizing social and professional networking events to managing finance to resolving complaints in the service of engineering “community” and togetherness among creatives and knowledge professionals. While their roles are contradictory, ambiguously defined, and underpaid, community managers nevertheless play a powerful intermediating role in connecting disparate individual workers to help reduce their isolation and create more hospitable work environments. This cultivation of community care may have contributed to expressions of solidarity among some WeWork members with contracted cleaners who protested their termination from the company when they attempted to unionize. Such moments of care and solidarity, the authors argue, may point the way to a more equitable future of work than fair wages alone (Gregg and Lodato 2018). The emerging solidarities across multiple social worlds and communities of practice in the knowledge and information economy highlight how mindful labor can dissolve the boundaries between individuals and society, as the WeWork example suggests, pointing to alternative futures for the valuation of work and life. As Judy Wajcman notes, “there is nothing natural or inevitable about the way we work” (Wajcman 2015, 166).

Like most academic books, Counterproductive identifies and explicates a problem while shying away from explicit policy recommendations and design solutions. Nevertheless, Gregg breaks from the dominant mode of negative academic critique by pressing us to reflect on what another world of work could look like. She reminds us that we are not hostage to enterprise techniques that valorize meaningless productivity. In the best tradition of feminist science and technology studies, the book underscores how human agency along with the technological objects themselves help shape and produce workable futures together. In so doing, Gregg opens up a creative space for collective conversations. Forging diverse alliances for different visions of shared living that redraw the work-family/health/leisure time nexus, then, is both a challenge and opportunity for our environmentally stressed times. A reflexive socio-historical analysis of how we arrived at today’s hyper-individualistic drive to be productive in our careers is a first step towards broader societal efforts to reclaim labor and transform it into the interests of all workers.

Wajcman, Judy. Pressed for Time: The Acceleration of Life in Digital Capitalism (The University of Chicago Press, 2015).

Raymond June is a design and digital ethnographer. He is currently a Senior UX Researcher at Workday. He received his Ph.D. from the University of California at Berkeley in education with an anthropology emphasis under the guidance of Jean Lave. He worked as a researcher in global development and humanitarian aid for several years before transitioning to industry. His primary specialties are mobility, work culture, payment technologies and financial inclusion, and education.

The Root Cause Is Capitalism...and Patriarchy, Lindsey Wallace & Jenna Melnyk